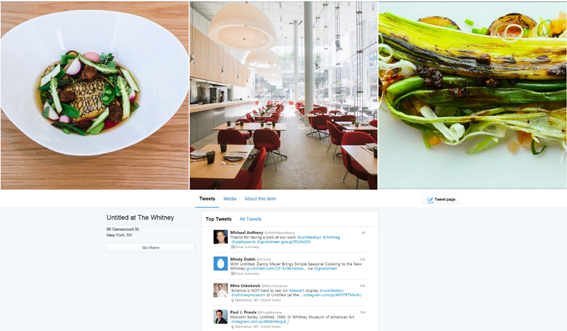 Destinations, attractions and other tourism businesses will soon be able to promote themselves even better on Twitter thanks to a new feature being tested by the microblogging network.

Twitter is testing the idea of dedicated pages for products and places – called collections – which feature images, video and information such as a description, price, and an option to buy, book, or visit the website for more information. In addition the page will bring together tweets posted by people in your network as well as trending tweets on that subject.

Twitter users will eventually be able to create and curate collections using hand-selected tweets or ones which have been programmatically managed via the Twitter API. Collections are public and can be embedded in websites and apps.

The network is also testing ways to create and share these collections and is working with a number of celebrities, retailers and others. On Twitter for iOS, you can find collections by tapping the search bar and tapping on the category menu beneath it. On Twitter.com and Twitter for Android, you can visit these curators’ profiles to see their collections.

Ariana Grande, William Shatner, Demi Lovato, TechCrunch and Game of Thrones are among the other launch partners.

The possibilities for tourism and travel businesses are obvious. Destinations can curate collections of restaurants, museums, beaches, anything that springs to mind.

If you have updated your Twitter app on iOS recently, you may have noticed a new development over the past week – autoplay. The network has followed in the footsteps of Facebook and now enables native video, Vines and animated GIFs to start playing automatically.

As with Facebook’s autoplay, videos only play with sound if you tap them. If you turn the video to landscape mode, the sound will automatically turn on and the video will expand to fill the screen. You can go back to click-to-play at any time and also set it so that videos only autplay when you are on wi-fi. The company says, “If you’re somewhere with high data rates or you have low bandwidth on your device, we’ll opt you out of autoplay to avoid unexpected charges or slow performance; so you’ll continue to see videos as click-to-play.”

Twitter is hoping to get the same sort of uplift as Facebook from making the video experience better. In April, Facebook announced that videos on Facebook were attracting four billion views every day. That’s an impressive figure but not as impressive as the growth; in January, this figure was three billion a day. If there were ever a wake-up call to tourism brands to invest more in creating video, this is it.