On 5 December 2016, the Australian city of Darebin, a municipality in the suburbs of northern Melbourne, was the first place in the world to declare a climate emergency. Since then it has been joined by ever greater numbers of towns, villages, cities, regions and countries around the world. The UK parliament was the first country to do so, in May 2019. It has since been joined by Ireland, Canada, France, Argentina, Spain and Austria. 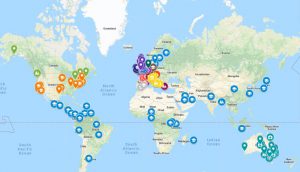 It’s not only local and national governments who are signing up the regions they represent. Non-governmental organisations representing a wide range of other sectors have also been declaring an  emergency, acknowledging the impact their operations have on the climate, and the effects the worsening disaster has on their work in return.  They represent all sorts of groups, including universities, political parties, scientific societies, and environmental organisations.

The International Federation of Social Workers has signed a declaration. Architecture firms have launched Architects Declare, a move described by the Architects Journal as “a remarkable call-to-arms on climate change”. Elsewhere, the Culture Declares Declaration features signatories as diverse as Shakespeares Globe, the Royal Court Theatre, the Israel Festival in Jerusalem, and individual artists such as Anthony Gormley and Gavin Turk.

Last month saw perhaps the most significant of these Non-governmental Declarations –  the launch in London of Business Declares. It features signatories from some of the most progressive businesses in the UK, including People Tree, Volans, The Body Shop and Pukka. There were also two signatories from the UK responsible travel sector in there – TYF and Flooglebinder.

So what does all this mean for tourism? We send visitors to all the places that have declared. These visitors stay in buildings designed by the people behind Architects Declare. Enjoy attractions run by signatories of Culture Declares. And their journeys to and from are responsible for an increasing percentage of the world’s rapidly reducing carbon budget.

How then, should those of us who work for Responsible or Sustainable Tourism respond to this groundswell of declarations? 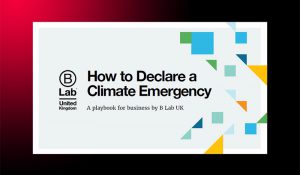 What does it mean to declare a climate emergency?

Although there are many different versions of the declaration, and different locales and businesses focus on different aspects, there are widely agreed principles. For the sake of this blog I have used what I consider to be the ones most relevant to companies working in the travel industry, which I have taken from B Corp’s excellent and highly recommended business guide to ‘How to Declare a Climate Emergency”.

According to the guide: “Declaring a Climate Emergency means committing to tell the truth about the reality of the climate breakdown and making a meaningful commitment to address this breakdown, by taking action to radically and urgently reduce carbon emissions”

There are three key principles:

World Travel Market takes place in a couple of weeks, with World Responsible Tourism Day on Wed November 5. I believe we should use this time, this opportunity to come together, to talk and to agree a way forward. We could start by exploring the following questions:

1: Should individual businesses join the Business Declares, or the Culture Declares Declarations?

2: If we represent DMOs or other location specific businesses, should we support and promote our regions’ Declarations, or where there isn’t one work with local government to launch one?

3: Should we launch a Tourism Declares a Climate Emergency declaration? Think of the specific nature of the travel industry – the combination of destinations, travellers from other locations, and companies responsible for bringing them there. Add the existential threats to our businesses and our hosts’ livelihoods. And of course there is the significant and growing contribution to emissions that our current business model makes. Does all this necessitate that we write and sign a declaration of our own?

For our industry, or at least for certain parts of it, to declare our own climate emergency will not be easy. We will face huge criticism over our continued over-reliance on aviation. We will argue amongst ourselves over the efficacy and legitimacy of offsets. Signing a declaration will mean acknowledging these and other challenges, and committing to work together to solve them.

However, if we don’t at least try, all of tourism will increasingly become a target for the likes of Extinction Rebellion and the good work that is done by the best in our industry will be threatened. Carrying on as before, or just tweaking business as usual is not an option.

We need to transform our business not to do less harm, but to actively restore the habitats and communities where we work.

We need to learn from inspirational pioneers, starting with the work of Anna Pollock and Tourism Flanders, in developing a new regenerative tourism model.

We need to ground all these efforts in a truthful acknowledgement that this crisis is existential.

For all these reasons I believe Tourism Declares a Climate Emergency is a necessary step towards mobilising our industry to be part of the solution. Do you?