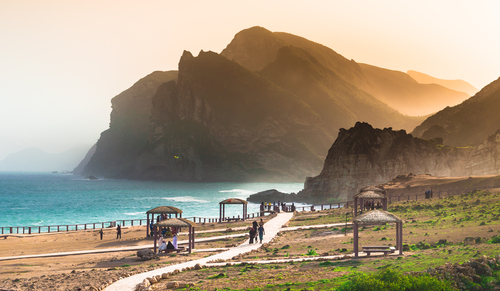 Oman is looking to increase interest in tourism from the UK and other key markets at WTM London 2017 after reporting ‘very encouraging’ visitor figures in the first half of 2017.

By 2040, Oman aims to attract more than 11.7 million visitors, making tourism one of the most significant income generators in the Sultanate, at between six and 10% of annual GDP.

To cater for a planned increase in visitors, Muscat International Airport’s new terminal will be operational by the end of 2017 and will have the ability to handle 12 million passengers each year.

A number of new hotels have opened or are scheduled to open by the end of 2017, including the luxury Kempinski Hotel in Al Mouj, Muscat; the dusitD2 Palm Mall Muscat and the luxury development of Muscat Bay.

Elsewhere, the former commercial port, Port Sultan Qaboos, is under development to transform into a major tourist and business travel destination with hotels, retail and cultural areas.

Once the transformation is complete, the port will be renamed Mina Sultan Qaboos Waterfront.

Finally, the opening of the Oman Convention and Exhibition Centre (OCEC) is now firmly establishing the country as a major meetings, incentives, conferences and exhibitions (MICE) destination.

Located in its own precinct 10 minutes from Muscat International Airport, this world-class facility is perfectly suited to host international, regional and national conventions, exhibitions and business events.

Among its features is a tiered auditorium seating 3,200 people and more than 22,000 square metres of column-free exhibition space.