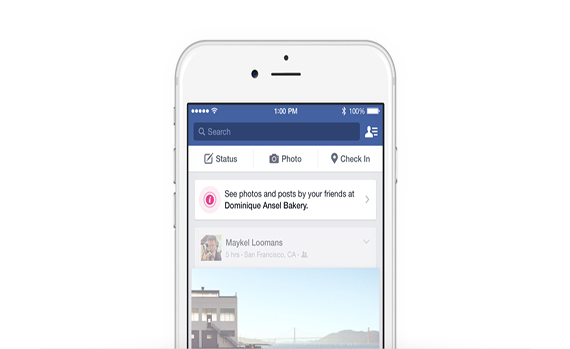 In the past week, Facebook has made it’s latest attempt to grab a bigger share of the geolocation market with the launch of Place Tips.

These nuggets of useful and relevant information and friends’ recommendations will now start to appear at the top of your Newsfeed while you are travelling. Clicking on a tip will bring up photos and posts from your friends about the place as well as posts from the location’s own business Page and menus for restaurants and event details for venues.

The service is currently being tested in the US and tips are current only available on Facebook for iPhone. Mike LeBeau, Facebook project manager, says, “Tapping on place tips won’t post on Facebook or show anyone where you are.”

On one level, your location is determined by Wi-Fi and GPS as you would normally. Facebook is testing this in New York’s Cental park, Brooklyn Bridge, Times Square, the Statue of Liberty and JFK Airport.

Perhaps more interestingly, Facebook is also trialling the use of Bluetooth beacons in a number of places in New York: the Metropolitan Museum of Art, Dominique Ansel Bakery, the burger joint at Le Parker Meridien Hotel and the Big Gay Ice Cream Shop. These beacons (shown below) are given to businesses and use Bluetooth over a short range to send information to the Facebook app on your phone.

You can watch a video about the new feature here:

Bluetooth beacons looks set to become hugely important in the world of travel and several players are already looking at their use, including easyJet, which is trialling them at Luton, Gatwick and Paris CDG airports.

in May last year, Foursquare launched a free=standing app called Swarm which took on the check-in and location-sharing elements of Foursquare. In August, the latest version of the Foursquare app was launched and check-ins disappeared from it entirely, giving the app a new focus on local information and search.

The company says its services are used by 55 million people worldwide, who have checked in more than 6 billion times. By comparison, Facebook’s check-ins are now an integral part of the mobile experience. In its annual Year In Review round-up, the company now lists its 10 most checked-in locations in countries around the world, including the UK.