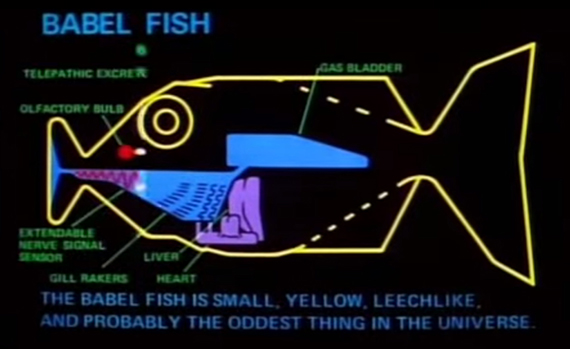 The future is here at last and science fiction aficionados will rejoice in the latest news to come out of Mountain View.

The news from Google headquarters is that it has turned its Google Translate app into something that would not look out of place in The Hitchhiker’s Guide to the Galaxy.

The first enhancement really is a another step on the road to having a Douglas Adams’ Babel Fish on your smartphone (see clip below).

The Google Translate app is already quite clever at providing spoken translations and it has been able to do real-time translations on Android since 2013 but the new update brings this feature to iOS for the first time.

At the same time, Google’s boffins have added something very clever – the app can now automatically detect which of the two languages used in the conversation is being used, meaning you can have a more fluid conversation.

While not perhaps as powerful as the Babel Fish, the updated Translate app, available now for both Android and iOS, is pretty clever.

The second bit of tech wizardry is that it has integrated a very powerful imaging app called WordLens into Translate. This has been available as a separate app for some time but a barrier to its use was that you had to pay for each translation dictionary.

If you don’t know it, WordLens works like this. Say you are on your travels in foreign climes and you come across a sign that you cannot read. Simply point your phone at it, switch on the camera and WordLens will translate the words into English – in real-time and in situ. For example, I used it to translate this sign from Portuguese.

On the left is the original sign, on the right is WordLens’ instant on-screen translation – invaluable I am sure you will agree even if the translation is not perfect.

Currently WordLens’ translations are only available between English and French, German, Italian, Portuguese, Russian and Spanish but more language pairs are on the way.

“The Translate app already lets you use camera mode to snap a photo of text and get a translation for it in 36 languages. Now, we’re taking it to the next level and letting you instantly translate text using your camera—so it’s way easier to navigate street signs in the Italian countryside or decide what to order off a Barcelona menu. While using the Translate app, just point your camera at a sign or text and you’ll see the translated text overlaid on your screen—even if you don’t have an Internet or data connection.”

The world just got much smaller.