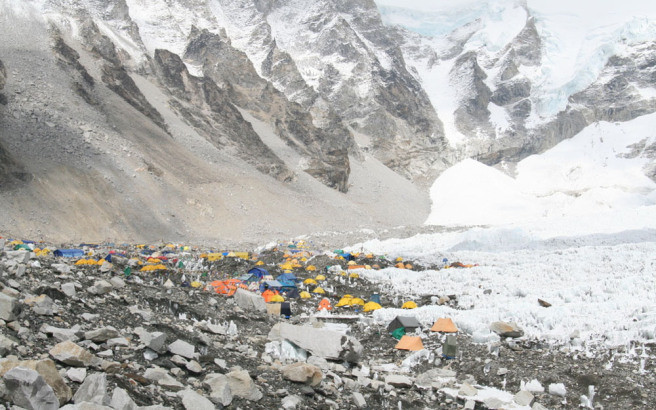 So bad has the problem of rubbish and human waste despoiling the world’s tallest mountain become, that starting this month, climbers on Mount Everest will have to bring back 8kg of rubbish and waste per person. This will be weighed and checked and only when confirmed will their climbing group be given back their $4,000 deposit.

When I first read this story I saw it as a positive step. Visitors were being compelled to take responsibility for their impact. Then I noticed on the BBC that the 8kg figure was chosen because “that is the amount experts think a climber has to leave up there when climbing Everest.”

An opportunity has been lost here. Everest is the ultimate destination, the place that Mallory wanted to climb simply ‘because it’s there’. That it is covered in so much rubbish epitomises the problems inherent in how much of tourism is designed. We go, we have our fun, we leave the mess for someone else to clean up.

By setting the limit at the symbolic 8kg, the authorities are saying to the climbers – take responsibility for your own mess. But had they set the figure at something ‘experts’ had decided was more than the amount one person makes – 10kg say – they would have been sending out a more positive message. They’d have said: visiting this sacred peak is a privilege. Help us restore it.

Another recent story makes clear how limited this 8kg rule is. On April 4th, a team of 34 soldiers from the Indian army and Nepali sherpas arrived in Kathmandu on an expedition to bring back 4,000kg from the mountain. In other words, it’s the locals doing the real work.

In the end though, whatever figure they set, when the experts decided that on average a climber on Everest ‘has to leave’ 8kg of waste on Everest they were approaching this problem the wrong way. Rather than starting with a question like: ‘what is the least waste a climber can produce?, they should start with one that goes: ‘what can we usefully do with the waste a climber produces?’

This is the basis for the Circular Economy. It’s an approach to dealing with materials – and by extension the economic thinking and society that uses them. And it has been gaining popularity recently, especially since the long distance yachtswoman and now environmental activist created the Ellen Macarthur Foundation to focus on it.

At its simplest the Circular Economy’s aim is to redesign our industrial processes so as to repurpose as much non-biodegradable waste as possible back into the production cycle. Or, as Phillips’ website describes it: “a circular economy aims to decouple economic growth from the use of natural resources and ecosystems by using those resources more effectively“. It’s how you get the sort of innovations that would really help on Everest – innovations such as the Jetboil stove, which runs on biomass – including human waste.

To see just how far this sort of thinking could be applied to tourism, look at plans for the innovative Pool+ project in Manhattan. The idea is for a floating pool in the Hudson river that would filter the river’s water through its walls, making it possible for New Yorkers and visitors to swim in clean river water. According to the project’s website, “the filtration system incrementally removes bacteria and contaminants to ensure nothing but clean, swimmable water that meets both city and state standards. No chemicals, no additives, just natural river water.” Once built, Pool+ is designed to clean up to half a million gallons of water every single day.

You turn a water filtration plant into a visitor attraction. The pool fees help clean your river. It amounts to a lot more than a symbolic drop in the ocean. Or lugging an extra 8kg off a mountain.