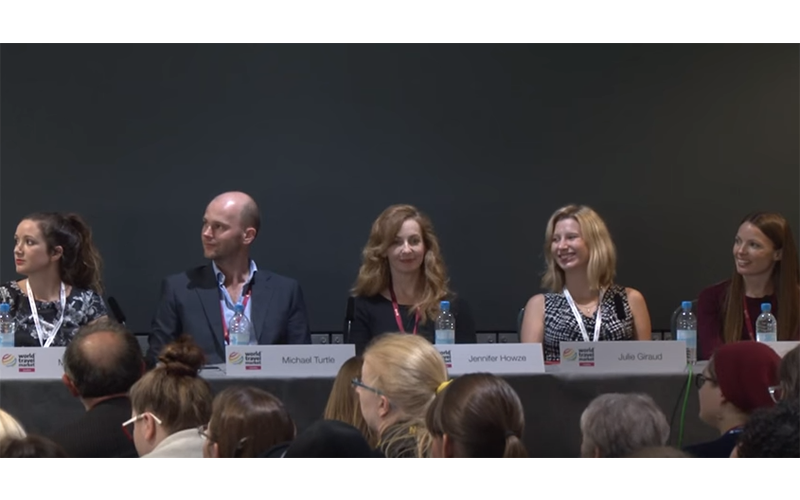 We at Traverse ran four sessions based around blogging as part of the World Travel Market London seminar program.

Being at WTM London in more of an ‘official’ capacity has special meaning for us at Traverse as it was at the Excel in early November 2012 that Paul Dow and myself came up with the idea for running the first Traverse bloggers conference, which we held the following April in Brighton. While we have attended WTM in some capacity since 2011, it was 2015 that we really became part of the event, and seeing ‘Traverse’ on the planner is something that will always remain a highlight of the company’s history.

We ran four sessions for World Travel Market London and after weeks, even months, of deliberation over the topics we had finally settled on the four we were going to run.

Running sessions at WTM London represented a change in style for us, for the first time we were putting together a program that was aimed at the whole of the travel industry, but was focussed on blogging, as opposed to being for the bloggers, as is the case with the majority of sessions at the Traverse conferences and BlogStock.

We were also very keen to make these sessions varied and different in their format, while we have no problem with running sessions as a pure panel or with two speakers, or even just one presenter, we wanted to make sure that each of the Traverse sessions was a little different, not least from the other three we were running.

Our first ever session at WTM London didn’t look like it would start off fantastically, a strike on the Docklands Light Railway seemed as though it would leave the 400 person seminar room empty and the speakers and sponsor (Hertz) disappointed. We were delighted, then, when over 250 people showed up despite the strike an others filtered in throughout the session to bring the numbers closer to 350 by the end of the session.

We had two speakers for this session, Penny Alexander, a mum and travel blogger as well as Heather Healy from the agency Stickyeyes. Both speakers gave excellent presentations and it seemed as though every one of the attendees left satisfied and a little more knowledgeable. The case studies that Penny provided, coupled with the exceptional insight from Heather, mad the talk as well rounded as it could be and ensured that all those watching would have learned something from the hour.

Six new trends that will change the world

Taking place on the Tuesday afternoon, we had three fantastic presenters for this session and went with a format of each one presenting two trends, before the audience voted on which one trend would be the most important over the next year.

Peter Jordon from Toposophy, who also sponsored the session, was first up and delivered a fantastic 15 minute presentation. Following on from Peter was Ian Cummings, the founder of Travel Massive, who spoke about two great trends before Sarah-Betty Andrews finished off the presentations with her take on what would change the world of travel. This session concluded with a vote by the audience, which was won by Ian (although bribery allegations remain rife to this day!).

The surprise for this session for me was the number of people in attendance, every one of the 400 seats was filled with another 100 or so people standing at the back. My fears about our sessions being half empty had been laid to rest.

Our third session took place on Wednesday morning and over 300 people showed to see what I believe to be the strongest session in terms of content that we ran all week.

We had three speakers for this session, Kash Bhattacharya, the founder of BudgetTraveller, Allison Busacca, the editor of BBC.com/travel and Tika Larasati, Influencer Marketing Manager at Skyscanner, the session’s sponsor. Each speaker answered the topic’s title question in their own expert way and gave a truly unique presentation that somehow managed not to overlap with either other speaker in the slightest.

Show me the money!

This was our final session and always one that was likely to divide opinion among those in the travel industry and the bloggers in attendance.

This whole session was run as a panel, we had originally planned to talk about Traverse Connect and the results of a survey we had run, but we decided late on to use the full hour for questions from the 450+ audience.

I personally moderated this panel and it was the first time I have done this, I was keen to get as many questions in as possible from the audience and so tried to direct those questions to specific panellists and also urged them to keep the answers short. Overall I personally felt this event was a big success, we are yet to hear any negative comments, apart from one tweet who said the host was boring and talked too much, thanks!

The panellists consisted of bloggers Julie Falconer, Monica Stott and Michael Turtle, Julie Giraud from Four Communications and Jennifer Howze, the founder of Britmums. All five did a fantastic job, nothing was scripted and seeing how quickly, thoroughly and eloquently they answered the questions, tough and easy, was fantastic and made my job of moderator an absolute pleasure.

To watch the session visit http://new-wtm.bitnamiapp.com/wordpress/wtm-tv/