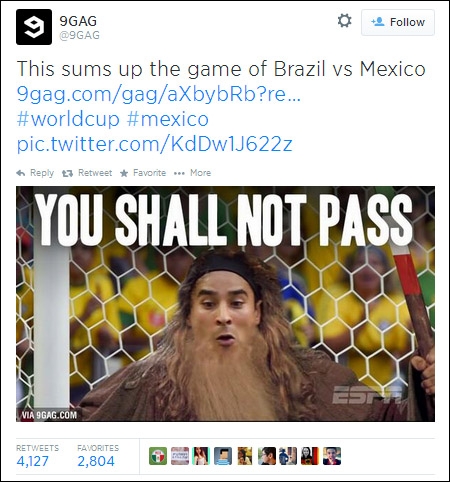 If you are on Twitter, you won’t need any introduction to the concept of newsjacking. It is the, some say shameless, practice of jumping on board something that is happening in the news and generating some social coverage for your brand. The practice is particularly prevalent in sporting events, with one of the most memorable examples when chocolate and cream biscuit Oreo posted the following picture on its Twitter account when the lights went out during the 2013 Superbowl.

The phenomenon is closely linked to the idea of second-screen use – watching TV while simultaneously using another device, such as a smartphone or tablet. Research by Octagon into second screen usage showed that 76% of adults have used a second screen in the past year while watching a sports match on TV, up from 62% in 2011. the same research showed that 66% of women and 49% of men regularly use Facebook while watching sport while 32% of women and 26% of men regularly use Twitter.

This summer’s football World Cup is likely to be the most watched TV event ever – FIFA is predicting a total audience of 3.2 billion. In the UK, England’s first World Cup match averaged a TV audience of 11.51 million, reaching a peak of 15.65 million, despite not kicking off until 11pm. Other matches, such as Iran-Nigeria, are getting audiences of around 5 million.

This, combined with growing device usage, means it is also set to the biggest second screen event ever. As a result, brands – both official World Cup sponsors and others – have been preparing their social media plans carefully for the month-long tournament to take advantage. Many larger organisations have even set up social war rooms to be able to react in real time to events that happen during matches.

The trick with newsjacking, as Oreo found out, is not just to add a trending hashtag to something entirely unrelated, for example posting a bit of unimportant company news and just putting #worldcup on the end. Humour and establishing a social tone of voice is more important.

The World Cup is so rich in incident and stories that linking something to your brand is not too difficult.

Take the recent group game between Brazil and Mexico. The game ended in a 0-0 draw after some spectacular goalkeeping from Mexico stopper Guillermo Ochoa (@yosoy8a on Twitter), who deservedly won man of the match.

You won’t see many better saves during the #worldcup than @yosoy8a…apart from our beach holiday offers to Mexico www.bit.ly/ochoaoffers #shameslessnewsjack #crapjoke

The hashtags at the end are show that you are doing this in a knowing way with a nod to the users of social networks, even though you are trying to win some clicks.

During the same match, Brazil’s Marcelo blatantly dived in the penalty box after a slight touch from Mexico’s Jimenez. If you are a diving holiday specialist, you could have tweeted the following:

Need to learn to dive better @12MarceloV? Why not book one of our beginner holidays at www.diveholidaysrus.com/marcelo

(Note the use of a dedicated landing page on your website so you can track who uses it.)

Yes as Oreo found out, newsjacking often works best for increasing the awareness of a brand rather than pushing specific offers. This means creating so-called “native” content – things that do not stand out as bandwagon-jumping calls to action but instead create a sense of warmth among social media users.

With so many people watching the football and so many using second screens at the same time, getting reach and winning new followers who like your sense of humour and style is all important. You can save the calls to action until after the last ball of the World Cup has been kicked.