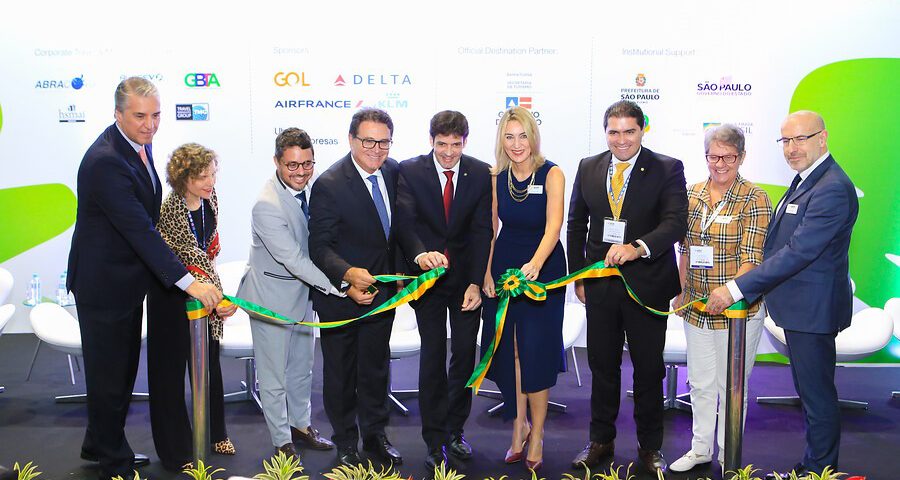 In its 7th edition, the main global event in the travel sector in Latin America brought together authorities and the organization’s board in the opening ceremony

WTM Latin America, the main global event in the travel sector in Latin America, lasting until Thursday, April 4th, and which brings together various authorities, official tourist representatives and the event’s directors, held its opening ceremony this Tuesday morning, April 2nd, at the Expo Center Norte, in São Paulo.

Marking the first day of the event, now in its seventh edition and in a pavilion with over 50 countries and 600 exhibitors, was the positive and optimistic mood at the meeting, which launched the theme of “tourism”, permeating the show over its three days.

Luciane Leite, director of WTM Latin America, officially opened the agenda and emphasised: “In the light of such an optimistic and promising scenario, we stress our commitment and our eagerness and desire to be even greater protagonists in the lasting search for the ongoing evolution of our industry”, said the executive, while underlining the show’s goal. “Generating business is what motivates us. Allied with this is a team working hard to deliver, each year, a better pavilion, richer in its offer of products and services, full of innovation and quality content. A more plural and diverse pavilion”.

During the opening, also present on the stage was Fernando Fischer, President of Reed Exhibitions Alcantara Machado, who emphasised the importance of the event and of bringing together the main market players over these three days. “It’s always worth remembering, for each of us present, that this sector you see here is the sector that makes magic, a sector that transforms in a positive way. It’s where the end customer is able to leave the event feeling even better than when he entered. This, independent of numbers, is something extremely special”, said Fisher, who finished his short speech with a warm thank you to all the clients and partners, and for the space and the team of Luciane Leite – referring to a team that embodies the meaning of resilience, hospitality, honesty and willpower. For Claude Blanc, director of the WTM portfolio, “WTM Latin America is the main event in the region’s B2B segment, and we want it to continue growing in size and importance. With every passing year, we see considerable growth in the number of visitors. We’re on the right track”, said Blanc.

The meeting also brought together sector authorities, who had an opportunity to comment on the expectations for the industry and how each individual could contribute to sustainable and promising growth. According to Vinícius Lummertz, São Paulo State’s tourism secretary, on this occasion representing Governor João Dória, there is much expectation and hope in the sector and, in his speech, made a point of emphasising the event’s reach and importance. For him, “we are undeniably at a moment of growth in tourism. Tourism in Brazil has grown faster than the Brazilian economy – even though we want much more. We must free up Brazilian tourism so that it can grow even more than it has.”

For Marcelo Álvaro Antônio, “Tourism is living in a moment of a liberal economy … the subject is now part of the Federal Government’s strategic agenda once and for all”, he said. And he also believes that this is a special edition of WTM Latin America. The executive also emphasised the importance of opening up foreign capital as being fundamental to reducing Brazil’s logistics problem: “only 12% of our roads are paved. We need to increase competitiveness by reducing the Brazil cost, providing better conditions for the domestic traveller”. Antônio said that the goals and challenges are already set: “we want to bring in more than 40 million travellers”, he added.

Among those present on the stage were also Ana Maria Berto, councillor to the Advisory Board of WTM Latin America. “We bring together all the leaders and all the productive levels in tourism, making sure our relationships are ever closer so we can increasingly develop and create new business”, added Ana Maria.

“Our workforce in the sector is over 60% female. Just here, we can see their importance – it is an industry carried out in its majority by women. In short, Women in Travel aims to encourage better relations, opportunities and exchanges”, said Alessandra Alonso, founder of the Women in Travel programme. “Statistics here in Latin America, in general, show what we see also around the world. We have the challenges faced by professionals in the area, such as promotion and career opportunities. That’s why we’re here today, together encouraging women to share their experiences, talk of the opportunities, share the challenges and find ways to support each other for growth. Strong women in tourism mean a strong industry”, said Alessandra Alonso, founder of the Women in Travel program.