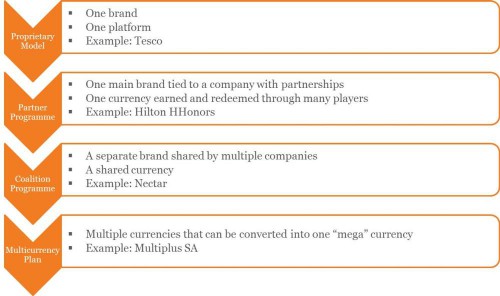 Airline loyalty programmes in transformation: To better cater to their highest paying passengers, airlines have made moves to reward these lucrative travellers better, including switching to a spend-based model for “miles” accumulation and joining forces with hotel loyalty programmes.

Evolution in hotel loyalty programmes: Although the hotel industry’s recovery led to devaluations, hotel companies continued to evolve their programmes, such as IHG offering free Wi-Fi for all members starting in July 2014.

Co-branding remains key but face challenges: Co-branded credit cards remain lucrative for the industry thanks to high-margin sales of points or miles. However, co-branded credit cards face obstacles with interchange fee regulation in Europe and to a lesser extent, competition from general rewards cards.

Prepaid cards show potential:Although prepaid cards are not as lucrative as co-branded credit cards, airlines are launching these cards to appeal to those who travel abroad frequently or do not have access to credit.

Improving the travel experience: Consumers today use multiple internet devices in a sequential or simultaneous manner. Travel companies need to build a flexible technological architecture in order to reach them, including a presence in wearable technologies.