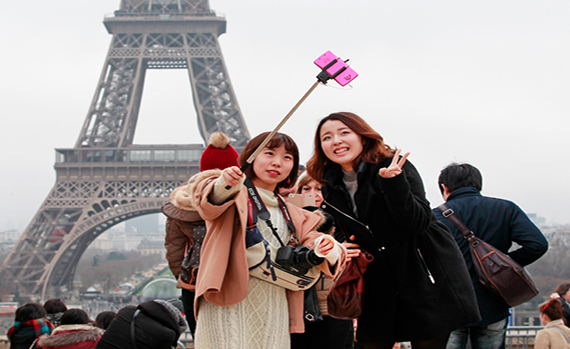 It’s getting to the point where you need to check whether its acceptable to brandish a selfie stick.

Last month, several museums banned the ubiquitous poles. Music venues, including the two O2 halls in London, have also told people to pack them away. Now comes news of several music festivals rushing to outlaw their use.

Coachella, in Palm Springs, California – which starts on April 10 – describes them as ‘narcissistics.’ Clever. Lollapalooza in Chicago has also put them on the banned list for this summer. A third event, dance music festival Ultra in Miami, join the killjoys. “They will be turned away and we’ll probably make fun of you,” says a spokesman.

Meanwhile, in Holland, two summer events run by Mojo Festivals this week added sticks to its list of dangerous items, along with laser pens and umbrellas. Umbrellas!

The festivals argue that they also spoil the view for other concert goers, which is a bit rich when you consider how flags are allowed and block the view far more effectively.

Cynics might suggest that copyright infringement might be a more plausible reason for attempting to ban their use – although, clearly, festival goers can continue to film at eye level.

But there is undoubtedly a backlash at last year’s must-have accessory, which bloggers now wouldn’t be seen dead without. Museums including the Metropolitan in New York, The Smithsonian in Washington DC and The National Gallery in London, fear they might be waved around and damage paintings.

Other tourism attractions considering their use including theme parks, where it is fair to say somebody holding a selfie on the ground is fine. But perhaps not when sitting in front of you on a rollercoaster ride.

There, we’d suggest a Go Pro safely strapped to the head. For other occasions, we were excited to hear about the ‘selfie shoe’ with an opening to hold a smartphone. Just lift your leg and away you go.

But sadly the story from shoe brand Miz Mooz turned out to be an April Fool (not that fashion blog InStyle got it and ran the story straight.)

So it’s the end, in some places. for the selfie stick creating occasionally brilliant social media images. Bring back long arms, or grabbing a passing stranger. Or go and buy a drone, this year’s must-have (but far more expensive) social accessory.

Until they get banned, of course.