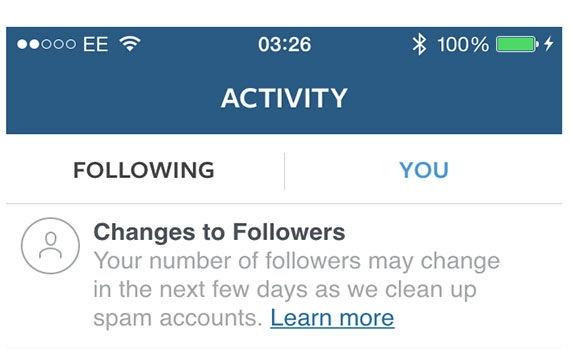 Over the past five years, bloggers and brands have built fictitious number of real followers. They have bought followers, blindly followed everybody that follows them (without regard) or hashtagged to death to gain automated (and often spamming) followers.

Who cared? It was the Wild West, whereby headline numbers mattered more than anything in earning press trips or commercial contracts. Nobody was checking.

No more. Instagram has joined Twitter in cleaning up its act, and followed Facebook, in looking to get shot of spam and, frankly, waste of time accounts that mean nothing. Except to headline figures and, therefore, commercial gain (see image, above).

It’s a move which is welcome. How can it not be, if it helps level the playing field of genuine social media users who earn merit through their efforts, rather than through spurious black arts? I know of several Instagram and Twitter blogger accounts that have built dodgy numbers over the years – and capitalised on them.

Jenny Hansen of writersinthestorm recommends uses Tweepi for annual Twitter clean-ups. There are several similar sites to clean up your Twitter account and keep it real, such as The Twit Cleaner and Untweeps. I use Tweetsmap, which tells you which accounts have been inactive for two or six months – very useful for cleaning up that dead wood.One report says the Instagram crackdown could see 10m accounts being deleted from its base of 300m active users. Well, hooray – being clean has always been the only way to build trustworthy social media for the long term. As Facebook has regularly cracked down on spam, so latter day social media platforms have had to follow, not least to maintain credibility. And there have been tools for some time to help clean up dead wood accounts – as should be good practice.

Let’s face it, if an account has been inactive for any period of time, they were set up to spam or gave up – and are therefore not worth following if you want to stay lean and mean.

Igexorcist will block Instagram accounts that have had no interaction in the previous two-six months (but caveat emptor, I have not personally used it), while there is an app – Instaghost – that will identify inactive users, or ones that have stopped interacting.

Why bother? Because if you are into social media for the long term – e.g., years – then it is worthwhile staying on top of your followers and deleting this who contribute nothing. Otherwise, the accounts accumulate fluff, debris and dead wood – and your reputation suffers. And that is a social media account that is not worth having.