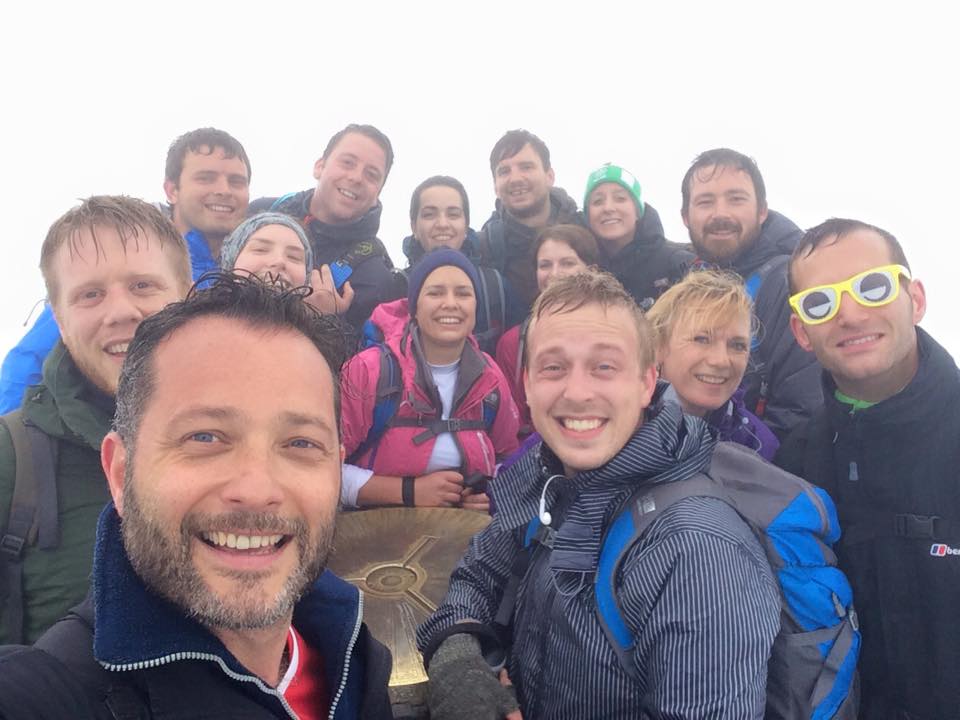 The supporters of international water aid charity, Just a Drop, have been known to cycle through ice fjords, shave their heads, jump out of planes and all manner of other derring-do activities. The latest in this line up is Feefo (an online, customer review system used by over 1,500 brands worldwide) who braved torrential rain, hail and gale force winds last month, to complete the Three Peaks Challenge – climbing the three highest peaks in Scotland, England and Wales, in just 28 hours!

“The team started at 5:30am from Fort William on the Saturday morning on the first ascent of Ben Nevis. It was nothing short of horrendous! What started as a pleasant sunny climb soon turned in to 40mph winds, a -5° degree wind chill, sheets of rain, snow and ice the further we went up. We all made it (how, I do not know), soaking wet and shivering. We practically had to climb on our hands and knees on to the cairn, clinging to each other to prevent us from being blown away – I am NOT exaggerating.

Two other groups we ran in to who were also undertaking the challenge on the same day had to abandon the climb due to the conditions! This was a massive set back to our overall time taking almost 6.5 hours of solid climbing up and down. My brand new ‘waterproof’ bag and trousers failed to cope with the conditions and all of my gear, including my boots, was soaked.

We then had a five hour drive to reach Scafell Pike in the Lake District (a challenge in itself) and began our second ascent at 6:30pm in much clearer conditions. Scafell Pike is known as the worst of the three climbs, being the steepest mountain but it was a comparative breeze against Ben Nevis. We completed the climb in 3.5 hours which is actually much faster than most groups do it in, which allowed us to regain some kudos with our bus driver who we overheard referring to us as a “slow group” to one of the other drivers earlier in the day! We just reached the top of the mountain in time to see the sunset which was breath-taking. Following a descent in the dark we headed off to Snowdonia at midnight on the next 5.5 hour drive – the bus smelling more like cheese with every mile…

We set off at 5am’ish (time was bit fuzzy by this point) on our final climb of Snowdon with perfect weather conditions and a glimmer of hope that the ordeal was almost over. Absolutely amazing views once again but tiredness was really taking its toll by this point and we were all relieved to get back to the bus and tuck in to our celebratory mini Proseccos and ice-cream!

All in all an unforgettable experience! It was great to undertake the challenge with a group of lovely people who all looked out for each other and added humour when things were tough. We’re all going out tomorrow night to celebrate!”

“The Three Peaks would be a great, truly wonderful thing if wasn’t for those three darn peaks!”

“In hindsight I would have preferred to pay the sponsorship”.

“When oh when will I be able to walk properly again?”

“Apparently the views were nice?”

From battling rain, hail and gale force winds on the Ben which challenged our morale, we tried to keep the smiles on our faces! We were luckier with Scafell Pike being rewarded by a beautiful sunset and climb in record time. Snowdon was climbed with mental strength as our physical strength by this stage was severely depleted! This Challenge was more challenging than we expected, however extremely rewarding and we are incredibly proud of our achievement and the support of our friends and family who have helped us raise over £4,500 for Just a Drop…. I think we can all agree though that we won’t be making any arrangements to visit Ben Nevis anytime soon!”

To support Feefo’s efforts, please make a donation via their JustGiving page: https://www.justgiving.com/Feefo3Peaks