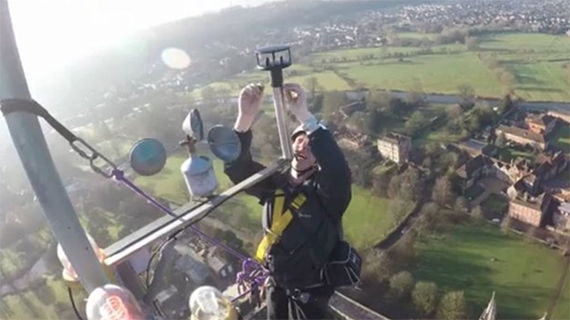 There was a distinct moment when David Coulthard realized he had ‘cracked’ the challenge of encouraging his staff to adopt social media.

The marketing manager of Salisbury Cathedral in south-west England spent two years trying to persuade his colleagues that they should embrace new ways of attracting visitors.

Then five months ago, his Clerk of Works, Gary Price, mentioned he had to climb the cathedral spire with a colleague to replace a weather vane. And would David like him to take a Go-Pro head video camera up with him?

The resulting (and terrifying) film, a spectacular view of the city from 123m above the ground, made the BBC and the online websites of national newspapers.

It was, says Coulthard, a defining moment in his quest to change the hearts and minds of the cathedral trustees, the 60 staff and 600 volunteers.

“We were swamped by blog ideas from staff and volunteers that weekend,” said Coulthard. “But it had taken a little while for people to get that confident about the value of digital and social media.”

He related the story at Social Travel Britain 2015, a conference that we at Travel Perspective staged at Sarum College in Salisbury two weeks ago. And it is exactly the sort of challenge facing all tourism attractions – the very real challenge of internal marketing to change attitudes as well as seeking success in external marketing.

The trustees had only wanted a new website but Coulthard pushed to launch email marketing, revenue generation through advertising on the website – and an engaging blog, with content from staff and volunteers. updates

It is easy to overlook – when receiving a constant blizzard of emails advocating best practice in SEO, blogging and paid-for advertising on social channels – that there are still large numbers of travel and tourism brands still feeling their way with social and digital media.

But these are the big boys with big budgets who have honed their social and digital skills over the past five years. Only now are large numbers of tourism providers getting to grips with the potential – such as Sally’s Cottages in Cumbria, which won the category of Best Overall Use of Social Media (Accommodation).

Aded owner Sally Fielding: “We have increased bookings by 37% over the past 12 months – and during January and February, 2015, we have had a 75% increase and we attribute this to our social media strategy.”

Such comments will be manna to smaller tourism and accommodation providers, many of whom still struggle to understand and implement effective strategies for digital success.

And for those DMOs and institutions like cathedrals, castles and stately homes, who face the additional headache of internal marketing. It is till early doors for many.

David Andrews, CEO of Visit Wiltshire, told the conference that the county came top of a recent survey of social media effectiveness across 126 tourist boards in the UK, largely thanks to an effective use of the hashtag #timeforwiltshire.

“We will move more and more to online,” he said. But he also acknowledged that printed material still plays an important role in creating tourist stays – and said people shouldn’t rely just on new technology.

“Lots of Wiltshire doesn’t have wifi or mobile phone coverage. In domestic British tourism, the biggest growth market is in the 50+ market so while we need to target youngsters on social, we also need to need to spend on print for older people.”

Coulthard, who recently moved on to become CEO of Chichester Cathedral, also acknowledged that it is far from a mature market for digital and social.

He had made mistakes at Salisbury, he said. “We didn’t have enough resource for digital early on, we failed to ensure our partners fully understood resource availability, there was a fear of informal, realism about training – and understanding how scary social media is for many people.”