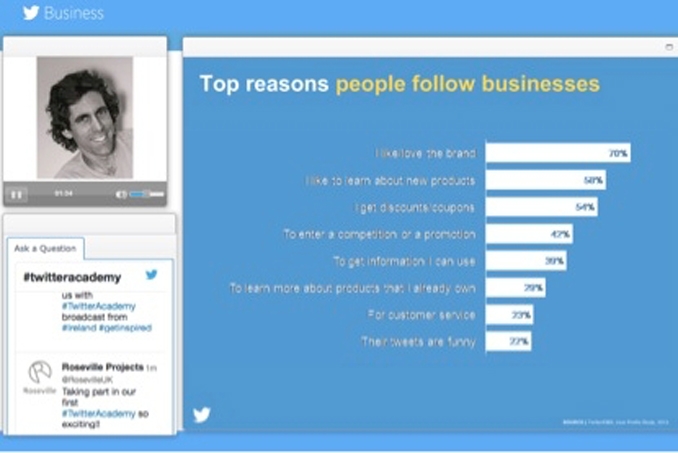 Twitter has become a commercial beast for some time now. But until last week, I’d not really considered it as a potential business tool, instead using the network for chat. For fun.

So time to tune in to a webinar with Brian Lavery who manages relationships on Twitter. To give him his full title, he is SMB (small-medium businesses) partnerships manager for EMEA (Europe, Middle East and Africa). In short, he is a friendly salesman face.

You can catch up on the webinar here.

It was basic warm-up staff: “Engage in conversation but listen carefully….’ ‘Use your Twitter username on biz cards, merchandise etc.,’

But it was quickly into better stuff. After all, it was only a 30-minute webinar. Sites with a Twitter share button get 7x more traffic back to site when compared to sites without the button, said Lavery. That’s a good takeaway.

And tweets with image links have 200% higher engagement rate than tweets without. While Factoid Three was: Tweets that contain links receive 86% higher RT rates than those without.

They’re the ones on the left with the little yellow box. They also show up on the timeline on mobile phones and in search. As opposed to promoted tweets, which show at the top of your feed.

Here, it was revealing in how much you can use data. With promoted tweets, you don’t shout at the universe: you shout at people who are interested. So, for example, if you were a sports shop, you can target followers of Nike or Puma. Or target interests, based on the content of users’ tweets, the people they follow and/or the tweets they engage with.

He gave more examples of best practise: 1. Include the word follow. 2. Provide a clear reason. 3. Run offers and contests. 4. Tailor the message. 5. Use specific events on which to bandwagon – “Twitter is doing a lot on the World Cup right now, or there’s the iPhone6 launch later this year.”

Very interesting. But (killer question), how much?

It is, he said, how much you’re willing to bid. Start in line with the suggested bid after registering for an account (ads.twitter.com). You register a credit card then pay as little or as much as you want.

If it is a ‘highly desirable audience’ all following a big event, it will be more expensive. But you will get organic and paid-for analytics, and Twitter says that 90% of followers you buy will stay with you for six months or more.

We all need to understand paid-for results, as with Facebook. And it worth 30 minutes to find out more. I’m off to try it – will let you know…