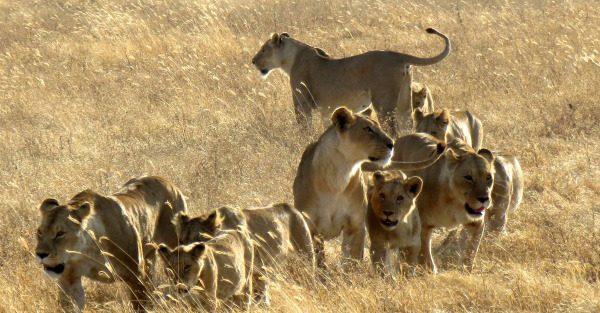 As our small plane approaches the Kogatende airstrip in Tanzania’s Northern Serengeti, we’re on the edge of our seats. We just flew over the majestic and active Ol Doinyo Lengai volcano—the only volcano in the world that spews black lava. And we know we’re about to see more wonders on this part of the planet – the wildlife. Then, a scene unfolds outside our windows—thousands of wildebeest and zebras seemingly awaiting our arrival. It’s the season of the great migration and it’s THE place to have a front row seat on the wildlife action that is integral to Tanzania.

Exiting the airplane, we’re greeted by Victor, our guide and the founder of Top Guides Safaris, who grew up in a village at the edge of the Serengeti. Having spent his youth living and following the animals, Victor is intimately acquainted with life here. His knowledge is about to lead us to discoveries we never thought possible. He’s accompanied by Frances, known as “Chaba” to his friends, who has been introducing guests to the incredible sights of his country since his teens. When he’s not working as a guide, Chaba is recording and performing his hip-hop music in Arusha. To say that we’re about to be immersed in the local culture is an understatement.

Already surrounded by animals, we set out in the safari vehicles for our first drive on the plains en route to Kaskaz Mara Camp — our luxury glamping accommodations for the next three nights. Barely out of the dusty parking lot we spot a herd of impalas—a bachelor accompanied by over 20 females. Nearby a troupe of vevet monkeys entertains us with their antics. There is a new discovery everywhere we look.

Further along the plains the scene changes. The rotting carcass of an elderly elephant lies exposed to the elements. Mongoose wander in and out feasting on the remaining flesh. And as we drive alongside the Mara River, the stench of the decaying carcasses of wildebeest that perished crossing the river fills our nostrils. It’s a pungent reminder that life isn’t always pleasant in the wild. This is after all the circle of life and it would become a recurring theme throughout our safari.

A Camp Even a City Girl Can Appreciate

After one of the most amazing drives, we arrive at Kaskaz Mara Camp and are greeted by the staff, with a refreshing beverage and hot towels to wipe away the remnants of the dusty drive. We’re then briefed on the “rules” of the camp:

With that welcome bit of news, we’re dispersed to check out our accommodations, with a libation in hand, of course.

Even though the outdoor “walls” are made of canvas and heavy-duty zippers serve as door knobs, our tents represent glamping at its best. The ten suites are positioned for optimal viewing of the migration and include stylish furnishings – an oversized king bed, a sofa, a desk and hardwood double vanities. Cotton curtains dance in the breeze through the large netted windows.

I’ve camped a bit in my life and I can say for certain that I’ve never dined on three course meals at any of those experiences—unless pork and beans count for two courses and chocolate chip cookies as the third. Our chef at KasKaz Mara Camp was incredibly talented. Over the course of three days and nights we ate lamb, chicken, fish and steak. His menus were inventive, well-presented and delicious. And don’t even get me started on the desserts. It’s a wonder our jeeps didn’t get stuck in every ravine we crossed after stuffing ourselves with all the decadent sweets.

We fell into a rhythm during our time here. Typically, we’d awake very early (5:00 am) before sunrise to venture out to see the animals before the throngs arrived from the other safaris. Our lack of sleep was awarded with incredible sights like a pride of lions feasting on its kill from the night before—again, nature isn’t always pretty. We’d explore until lunch then return to the camp in the heat of the day for a rest.

The evenings brought more animal adventures. One evening before sunset we came upon a “honeymooning” lion couple. When lions are mating, the “couple” will separate from the pride. For five days they mate every ten minutes—seriously. From our vehicles just a few feet away we watched as the male approached the female and nudged her to get started. She groaned a little before he hopped on and did his duty. Seconds (yes, seconds) later he majestically roared his satisfaction as she flopped over and went back to sleep. OK, so they’re not the most romantic creatures but apparently it works because we saw plenty of playful cubs during our time on the Serengeti.

The theme of unbelievable wildlife encounters continued throughout our trip. At times someone would say “I haven’t seen giraffes today.” And, within minutes the giraffes would appear. It was almost as if we were watching a Broadway play and the director said, “Cue the giraffes!”

Exploring Beyond the Serengeti

We left behind the Northern Serengeti to continue our explorations through the central and southern portions of the plains. From there we drove a dusty bumpy highway en route to the Ngorongoro Crater.

The Ngorongoro Crater is one of the world’s largest cauldrons formed by a violent volcano eruption millions of years ago. Since its formation, animals have resided at the bottom of it. We ventured into the crater early in the morning and found ourselves surrounded by lions. I literally looked into the eyes of a male lion as he strolled past our vehicle. It was chilling and thrilling at the same time. There’s something about a safari in Tanzania that changes you. It’s not just the interaction with the animals, it’s also the people. From the moment we arrived we knew we were forever altered. We shook our heads in wonder at the sights we were seeing, and we instantly craved more. To be honest, I’m not sure I was prepared for all we witnessed. We don’t always want to think about the “wild” being exactly what it is … wild. Life comes and goes on a regular basis in this wondrous part of our planet. And it’s natural, all of it. If you choose to participate, as we did, you must be prepared for the unpleasant smells and the reality that some animals exist to feed others. You must be prepared to witness up close and personal, the circle of life. And, yes, I would do it all over again in a heartbeat!