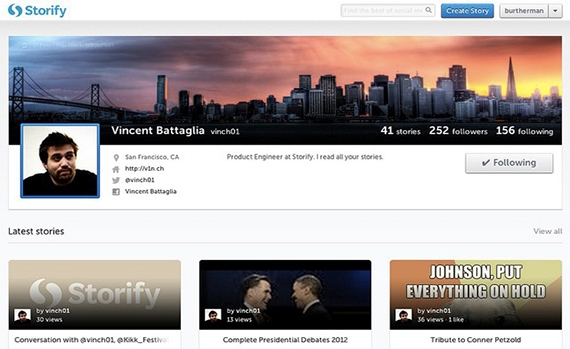 I don’t know how I feel about Storify. I mean, we’ve been together for two years now and I’ve never been let down.

Yes, I’ve dumped others. Farewell, Foursquare. So long Flickr, it was fun. It just became so, well, demanding… and difficult: your dalliance with Yahoo just did my head in.

But Storify I can’t let go. I know I don’t stay in touch that often, I don’t write or send a photo. I even forget anniversaries, for sure.

Once in a while I’m reminded, though. Like today. Visit England subscribed to my channel  and Storify was there, again, first and foremost in my thoughts.

I did wonder about Visit England, mind you, as I haven’t posted anything for nine months. But a quick check reveals VE has just created its first Storify (nothing in it, mind), has two followers and has followed 65.

And then I found a reason why VE has just discovered Storify. The channel was bought a year ago by a company called Livefyre which this month launched a new version of Storify.So VE is just starting out, dipping an English toe into the lukewarm water that is Storify. For that’s what it is, a nice warm bath to immerse yourself in every once in a while.

A report on The Next Web reveals that a new ‘Enterprise’ product allows multiple people to create a Storify at the same time.

The story will autosave with each stroke, and there a number of other enhancements. So maybe that’s what has piqued VE’s interest. But is it too little, too late?

I don’t know any passionate users of Storify. Even TV channels, much vaunted fans a while ago, seem to have drifted away – NBC News may have posted 90 stories and have 2,400 followers, but it hasn’t created anything since the start of 2014.

The Guardian newspaper, another early adopter since Storify’s launch in 2011, last created a story two years ago – as long ago as Buzzfeed. But I think they’ve found their own way to tell stories now.

Yet, yet… I don’t disown Storify. It proved immensely useful in collating social media mentions when we ran a blogger trip to Costa Brava 18 months ago.

And it’s World Travel Market time again, and I posted two Storifys last time around from our table football social evening. I’ll probably do it again because, as far as I know, there has been nothing better to replace Storify in the past three years.

I will probably use it again and again, when the opportunity arises. And the next time there is a big news incident, I’ve an idea that some media organisations will dust down its Storify account again. It is a very useful collation device, particularly if several people can work on the same story, making news story launches and updates even better.

But if it were to disappear tomorrow, it wouldn’t be a wrench, if truth be told. It would join the list of ex-suitors, the Room 101 of digital travel, where G+ and Whatsapp currently threaten to make an appearance.

Am I being harsh? So unfair? Are there people out there who really care for Storify (or, whisper it, know of an alternative?). I’d really like to know. Do tell me. I really don’t want to break up.