Tomorrow is Global Ethics Day, inspired by Earth Day and established by the Carnegie Council. It is an opportunity to explore the meaning of ethics in international affairs. Much of tourism is an international affair, we cross international boundaries to stay a while in other people’s places. One of Tourism Concern’s most memorable and important campaigns was “Our holidays, their homes.” The sociologist Valene Smith used the aspirational language of hosts and guests to explore the nature of tourism.  How is ethics relevant to tourism? 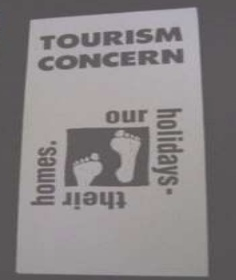 It was sad to see the closure of Tourism Concern after nearly 30 years of campaigning pointing out that tourism is not a pollution free industry and arguing that we can make tourism better. One of Tourism Concern’s last campaigns was for Ethical Travel – the campaign and listings are still available on their website.  It is ironic, although there may be a causal link, that Tourism Concern is closing for lack of funding just as coverage of the polluting impacts of tourism has broken out like a rash in the mainstream press, although there is still very little coverage in the travel pages or the trade press. Overtourism, a term much disliked by destinations in denial and by some destinations which are trying to tackle the problems with arise from tourism, is the antithesis of Responsible Tourism.

Back in the nineteen-nineties when I was engaged with VSO in their campaign for ethical tourism it quickly became apparent that there were a couple of major problems about the idea of ethical tourism. First, it is a big claim. What does it mean to be ethical, how do you prove or demonstrate that you are ethical, is any travel experience entirely and unquestionably ethical from every religious, philosophical or ethical perspective?

Second, not only is it a big claim it is a vague claim. I surveyed the membership of the Association of Independent Tour Operators (AITO) to find out what they were doing in destinations to address their impact and local issues. We found a wealth of examples, far more that AITO was aware of, examples which the businesses were very reticent about. Reticent in part because they did not want to brag about what they were doing in part for fear of putting their head above the parapet.

We settled on the concept of responsibility and Responsible Tourism because it enabled businesses to be clear about what they were taking responsibility for and why.  The credibility was in the specificity. Water is in short supply here, we conserve it and provide potable water for our neighbours. Many orphanages house children who are not orphans, we don’t do orphanage tourism.

The Responsible Tourism programmes at the WTM portfolio of trade shows in Cape Town, Dubai, London and Sao Paulo now have businesses and destination managers discuss the issues for which they are taking responsibility across the triple bottom line of economic, social and environmental sustainability and opening themselves up for challenge in the panels and from the audience. In the World Responsible Tourism Awards, and in the Africa and India sister Awards, we see businesses and destinations able to report the impacts of their responsibility and we transparently report why they have been awarded.

Not for those businesses, the grandiose and challengeable assertion that they are wholly ethical; other than they have chosen to take responsibility. And of course the antithesis of Responsible Tourism is Irresponsible Tourism and few relish that label.