Fifty years ago on December 24th 1968 the Apollo 8 astronauts took the famous Earthrise photograph as they orbited the moon, the first image of Earth captured by humans from space.

For the first time we could all see our planet, Spaceship Earth, as Buckminster Earth described it, as a finite planet floating is space. On our spaceship oxygen and food produced by nature sustains us.

This is the 2012 “Blue Marble” image taken by the VIIRS instrument aboard NASA’s Earth-observing satellite. 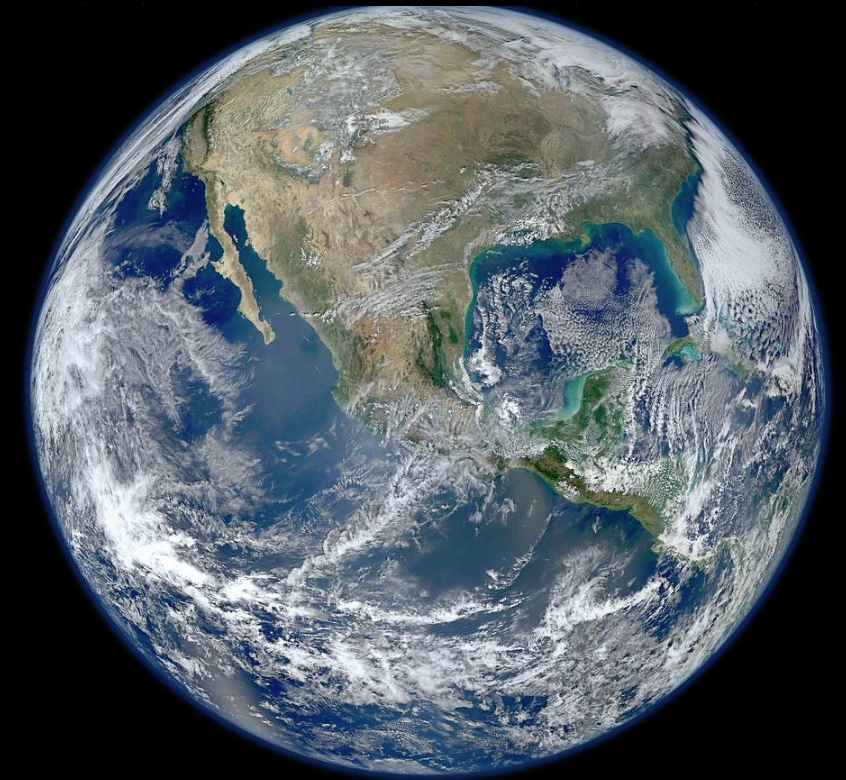 The earth is finite, in the late twentieth century we began to realise that our Earth’s ecosystems are important to sustaining life, our life, on earth.  In 1972 the Club of Rome published Limits to Growth which provided a computer simulation of what was likely to result if we continued to grow as we were. Given business as usual, i.e., no changes to historical growth trends, the limits to growth on earth would become evident by 2072, leading to “sudden and uncontrollable decline in both population and industrial capacity”. Subsequent research has shown that the forecasts were remarkably accurate.[1]

Our Earth’s atmosphere looks infinite when we look up at the stars. But our atmosphere is a relatively thin layer around the earth and we are rapidly increasing the proportion in it of CO2 and other greenhouse gases we are emitting as pollution. This pollution is causing global warming. Since the beginning of the Industrial Revolution, carbon dioxide concentrations in the atmosphere have risen from about 280 parts per million to 387 parts per million, a 39 percent increase. This means that for every million molecules in the atmosphere, 387 of them are now carbon dioxide—the highest concentration in two million years (read more here). The most recent IPCC report and the relative lack of progress in Katowice is disappointing.

The idea of Responsible Tourism originated with the work of Jost Krippendorf in the 1980s and alongside the World Summit on Sustainable Development in Johannesburg in 2002, the Cape Town Declaration on Responsible Tourism  asserted the importance of the producers and consumers of tourism and governments, taking responsibility for making tourism sustainable. Sustainability is the objective, responsibility is evidenced in the actions we take to achieve sustainability.

Responsible Tourism is now well established, but we must keep asking those who claim to be responsible, what they are doing to contribute to making travel and tourism more sustainable. We need to press for the evidence of positive impacts, we need certification plus.

At the WTM shows in Cape Town, Dubai, London and Sao Paulo in 2019 we are prioritizing the decarbonisation of travel and tourism and addressing the issues which matter. We are seeing progress in the World Responsible Tourism Awards presented at WTM, London in November each year and in Africa and India.

The Responsible Tourism programmes at each of the shows are designed to educate, inform and challenge the industry to do more. The legacy pages from 2018 WTM London are now updated with podcasts and PowerPoints reflecting the very broad Responsible Tourism agenda.

Fifty years on since we “discovered” our finite earth in those powerful images from space. We ought to have achieved more progress. We have to take responsibility and move beyond BAU, business as usual.

[1] Since 1972 there have been a number of studies which show the broad accuracy of the predictions, although there is still controversy. Most recently, 2014.  a Research paper from the University of Melbourne’s Sustainable  Society Institute. The concluded “Regrettably, the alignment of data trends with the LTG dynamics indicates that the early stages of collapse could occur within a decade, or might even be underway. This suggests, from a rational risk based perspective, that we have squandered the past decades, and that preparing for a collapsing global system could be even more important than trying to avoid collapse.” Page 16