There is little doubt that, assuming war does not break out, that climate change will be the dominant story of 2020. COP 25 was, to say the least, disappointing. The UK will host COP 26 in Glasgow in November, shortly after WTM London when nations will be challenged to demonstrate that they are taking effective action to reduce emissions. The graph below shows that no progress has yet been made.

Way back in 2006 the Stern Report, produced for the UK government, calculated the cost of cutting carbon emissions so that carbon dioxide peaked in the range of 450-550 ppm would cost 1 percent of the GDP annually, but ignoring climate change could cause economic damage in the order of up to 20 percent of the GDP. Stern made the point that the earlier the challenge of climate change was addressed the lower the cost to economies and living standards. When we fail to take effective action and we leave the problem to our children and the cost of addressing climate change increases each year.

Surely it is no longer possible to deny that our climate is changing. The science of the causal link between greenhouse gases and global warming has been known since the C19th in 1862 when Tyndall discovered that water vapour and CO2 prevent radiation of heat from the earth.  In 1896 the Swedish scientist Svante Arrhenius began to measure how changes in the earth’s atmosphere could alter the earth’s surface temperature. We now have continuous data on the concentrations of long-lived greenhouse gases in our atmosphere. 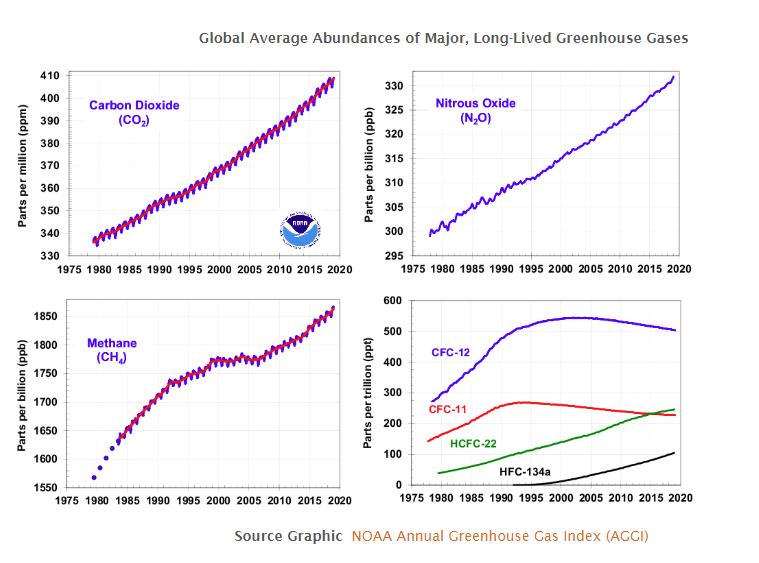 There is some cause for optimism here, two graphs turn down, we have been able to effectively address CFC refrigeration gases and the ozone layer has begun to recover. CFCs were effectively addressed because there was a relatively cheap alternative refrigerant gas, and because Margaret Thatcher was a chemist who understood the science.

“We are seeing a vast increase in the amount of carbon dioxide reaching the atmosphere. The annual increase is three billion tonnes: and half the carbon emitted since the Industrial Revolution still remains in the atmosphere.

But the problem of global climate change is one that affects us all and action will only be effective if it is taken at the international level.

It is no good squabbling over who is responsible or who should pay. Whole areas of our planet could be subject to drought and starvation if the pattern of rains and monsoons were to change as a result of the destruction of forests and the accumulation of greenhouse gases.

We should always remember that free markets are a means to an end. They would defeat their object if by their output they did more damage to the quality of life through pollution than the well-being they achieve by the production of goods and services.

… a framework is not enough. It will need to be filled out with specific undertakings, or protocols in diplomatic language, on the different aspects of climate change.

… protocols must be binding and there must be effective regimes to supervise and monitor their application. Otherwise those nations which accept and abide by environmental agreements, thus adding to their industrial costs, will lose out competitively to those who do We need our reason to teach us today that we are not, that we must not try to be, the lords of all we survey.

We are not the lords, we are the Lord’s creatures, the trustees of this planet, charged today with preserving life itself—preserving life with all its mystery and all its wonder not.”

Wise words from a politician who understood the science and are as relevant today as they were 30 years ago.

The patterns of rains and monsoons are changing. Flooding in Kerala, Jakarta and Yorkshire, drought and mega fires in Australia, the ice malign in the Arctic and Antarctica leading to sea level rise and drought causing starvation in Zambia and elsewhere. In Moscow artificial snow was created for the New Year celebrations. 2019 was Russia’s warmest year on record.

Accepting that some emissions are too difficult to reduce to zero, and aviation is one of those, the concept of net zero has gained traction.

Carbon offsetting is credible as a way of achieving net zero emissions and we have seen airlines deciding to include offsetting in the ticket price or to encourage passengers to buy offsets. The price of carbon offsets is an issue. If the price is low more people and companies take them up, more offsetting takes place. But if offsetting is cheaper than reducing carbon emissions, offsetting will reduce the incentives necessary to drive technical development. Offsetting may simply facilitate business as usual. If the offsets are poor quality and do not effectively reduce carbon emissions then net zero cannot be achieved this way.

Resilience requires that the travel and tourism industry prepare for the worst. We have not even begun to slow the rate of growth in greenhouse gas emissions. We need to reduce and adapt.

The threat is real, we need to reduce and adapt. Through the WTM Responsible Tourism Awards, the panels at the four shows in London, Cape Town, Dubai and Sao Paulo, and the blogs we shall focus on solutions. If you know of replicable examples of good practice to reduce or adapt please let us know about them. Email harold@haroldgoodwin.info