The last major pandemic was the erroneously named Spanish Flu which infected 500 million people in four successive waves. It infected about 30% of the world’s population and killed somewhere between 17 and 50 million people. The first reports of the illness came from the USA (Kansas and New York City) and then France, Germany and the UK. In a world at war, the military censors prevented coverage. Spain was neutral and without censorship, so the first public reports were from there. Had it not been for military censorship, the 1918-1920 pandemic would almost certainly have been the American Flu.

COVID-19 is not yet as deadly as the Spanish Flu, but this pandemic is far from over. Many of those countries which had experience with previous epidemics and maintained their preparedness to with public protocols and test, track and trace have more successfully contained the threat. Prof Kate Jones from University College London, evidence “broadly suggests that human-transformed ecosystems with lower biodiversity, such as agricultural or plantation landscapes, are often associated with increased human risk of many infections”.

Dr Christine Johnson of the University of California, Davis, US, told BBC News back in April that as we destroy natural habitat, we come into closer contact with wildlife. SARS, MERS and Ebola originated in wild animals. There is a growing awareness of the links between animal health and the health of our planet. In June Prof Matthew Baylis from the University of Liverpool told BBC News: “In the last 20 years, we’ve had six significant threats – SARS, MERS, Ebola, avian influenza and swine flu … We dodged five bullets, but the sixth got us.” He cautions “.. this is not the last pandemic we are going to face, so we need to be looking more closely at wildlife disease.” Tourism and biodiversity will be one of the main issues addressed at WTM, London in November.

Between 2011 and 2018, the WHO tracked 1483 epidemic events in 172 countries.  Epidemic-prone diseases such as influenza, Severe Acute Respiratory Syndrome (SARS), Middle East Respiratory Syndrome (MERS), Ebola, Zika, plague, Yellow Fever and others, are harbingers of a new era of high-impact. These potentially fast-spreading outbreaks are more frequently detected and increasingly difficult to manage. Fig. 1 demonstrates the global emergence of selected pathogens over the past 50 years, including both those that naturally emerge/re-emerge and those that are deliberately released. 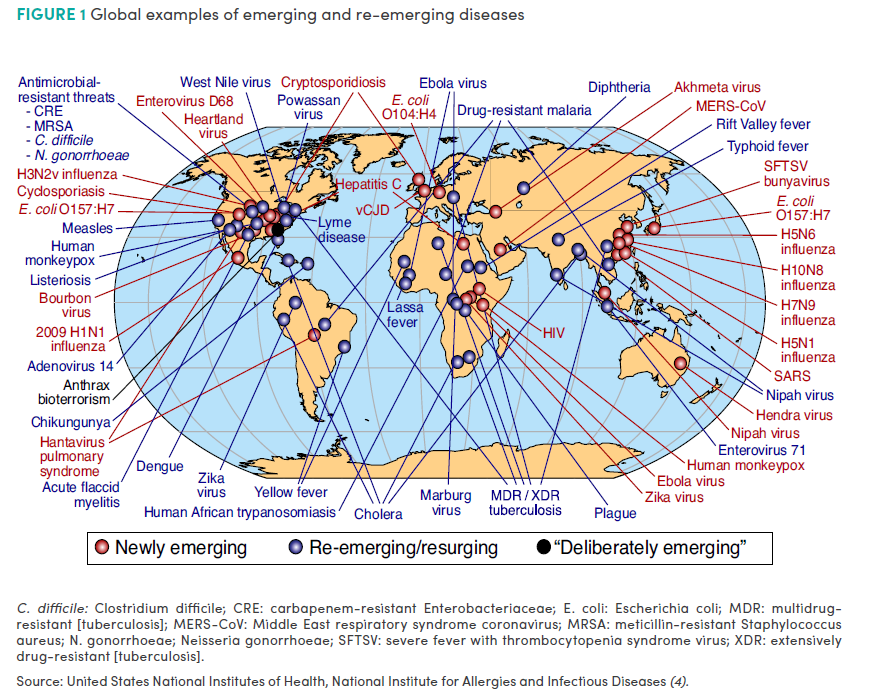 Global Preparedness Monitoring Board (GPMB) formed in 2018 by the World Health Organization and the World Bank Group is tasked to develop global preparedness to tackle epidemics and pandemics.  Their 2019 Annuals Report on A World at Risk is available to download here

The GPMB identifies “widespread and faster travel” as heightening vulnerability. Writing in September last year, before the COVID-19 pandemic, and reflecting on the 1918 global influenza pandemic they surmised that “If a similar contagion occurred today with a population four times larger and travel times anywhere in the world less than 36 hours, 50 – 80 million people could perish.”

The travel and tourism sector has been particularly hard hit by the global response to the COVID-19 pandemic as travel bans, international and domestic, closed down the industry. A vaccine and more effective treatment will contribute to the removal of travel bans and quarantine, it will take longer for consumer confidence to return.

The latest edition of RT News, now published fortnightly, is dominated by the challenge of COVID-19 and our sector’s response to it with reports on travel roulette, anti-lockdown protests, the challenge of creating trust and confidence. It is not all doom and gloom there are reports too of more conscious travellers, destinations rethinking tourism and the easing or travel restrictions in South Africa.  RT News is available online.