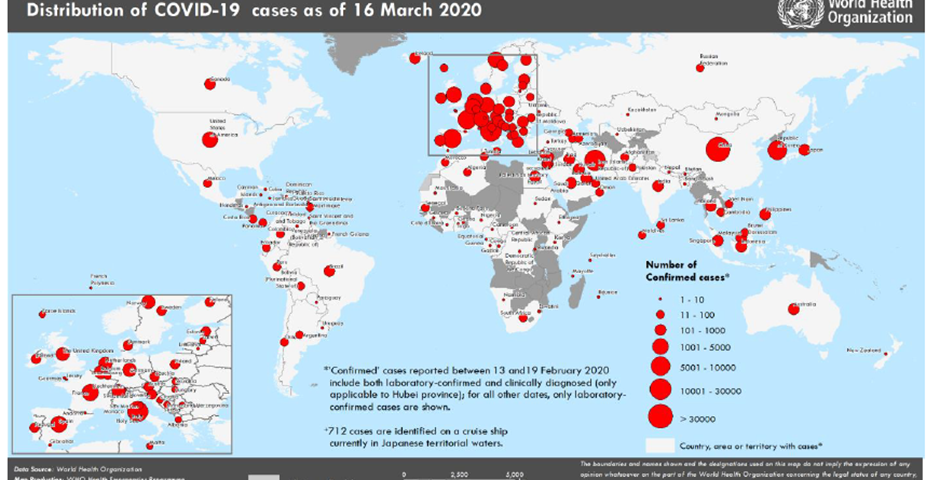 The World Health Organisation is providing data on the spread of the virus; national governments are determining their response. Governments around the world have acted to advise against and then restrict travel internationally and domestically. Measures to limit social contact and encourage and then impose social isolation have had major consequences for the travel and tourism sector.

These are tough times for communities around the world, in the midst of a public health emergency. Our sector should recognise the primacy of the risk to life, think about what we can do to help, avoid making the situation worse and avoid special pleading.

One week ago, as the worst of the pandemic in China appeared to pass, its policy focus shifted. China tightened quarantine measures for international arrivals imposing 14 days of centralised quarantine and compulsory testing. In South Korea officials attribute the country’s effective control of the outbreak to a strategy called TRUST, for transparency, robust screening and quarantine, unique but universally-applicable testing, strict control and treatment.

COVID-19 has rapidly become a global phenomenon, with many developed countries slow to recognise the scale of the threat and lacking the staff, ICU beds and ventilators to meet the pandemic. In 1918, in the wake of WWI with populations weakened by armed conflict and the privations of war, the respiratory influenza pandemic lasted from January 1918 to December 1920. To maintain morale, the censors minimised early reports of the illness and mortality in the combatant states; there were no such restrictions in neutral Spain, and the pandemic quickly became known, erroneously, as Spanish flu. Malnourishment, overcrowded medical camps and hospitals, and poor hygiene promoted bacterial superinfection. It is estimated that Spanish flu infected 500 million people, about a quarter of the world’s population, and killed between 17 and 50 million people.

Awareness of the Spanish flu pandemic receded until the arrival of bird flu and other pandemics in the 1990s and 2000s. This Coronavirus, Covid-19, is more lethal than 2009’s H1N1 (swine flu) pandemic, and the current coronavirus does not resemble SARS, MERS or Ebola, all of which can be more easily contained.

The impacts on travel and tourism have been significant. Zurab Pololikashvili, the S-G of UNWTO has “said that for now they must be patient and stand ready, by staying home today, they can travel tomorrow. And travelling tomorrow will support jobs, celebrate culture and promote international friendship and understanding.” WTTC has pointed to the damage incurred by the sector and called for governments to improve travel facilitation, remove barriers, ease fiscal policies, introduce incentives and support destinations – increase budgets and assign resources for promotion, marketing and product development…

In a world confronting an international health emergency and severe dislocation of entire economies, governments are responding with generic assistance. A century has passed since the Spanish flu pandemic and lessons learned then have been largely forgotten. When this pandemic passes, there will be lessons to learn internationally and locally.

There have been multiple problems with Covid-19 on cruise lines. The CDC has advised against all cruise travel worldwide, on 14th March CLIA ocean-going cruise lines “voluntarily and temporarily suspending cruise ship operations from U.S. ports of call for 30 days.”

Tourism dependency is bad for animals too. In Thailand monkeys are fighting for food – there are no tourists to feed them.

80% of tourism businesses are small and local. In difficult times like these, people, our neighbours will remember how we behave

Cornwall has an elderly population and stretched hospitals. There has been anger at tourism businesses encouraging tourists to holiday there:
“Jess Earle of Portwrinkle Holidays in south-east Cornwall said he had received death threats after offering holiday flats for people to self-isolate.
“The idea is to allow families with elderly relatives to come down here and ride this out at winter rates,” he said. “We are very secluded and we’ve had a lot of interest. “But I’ve had a lot of stick about bringing disease into the country which is very sad.” More

In the U.K. there is now a long list of destinations from the Highlands to Cumbria, Southwold, national parks, National Trust properties and London parks reporting people moving to the resorts and their second homes increasing the resident population and the strain on local supplies and the health and social care services.

Nicola Sturgeon announced that ferry companies to Scottish islands had been instructed not to carry tourists and other non-essential travellers. The Scottish first minister said hotels and holiday cottages should not take bookings for now. She said: “It may well be an understandable human instinct to think we can outrun a virus, but the fact is we can’t. What we do is we risk taking it to the places we go.” more

In Australia, the police had to move in to clear Bondi Beach to enforce social distancing. In Cape Town, the Bo-Kaap Ratepayers Association has been placed the area on lockdown urging tourists to stay out of the area to combat any further spread of Covid-19 “we are putting residents first and wealth last.” In The Gambia President Barrow has closed Gambian airspace and the border with Senegal, the consequences for tourism and employment will be profound.

The absence of tourism reminds is of its impacts. In Venice, the canals are reported to be running crystal clear as a consequence of the lack of pollution from the vaporetti as well as the drastically-reduced movement of other boats and cruise ships, and there are images online of fish swimming in clear water in the canals.

These are tough times for communities around the world, in the midst of a public health emergency. Our sector should recognise the primacy of the risk to life, think about what we can do to help, avoid making the situation worse and avoid special pleading.