For years the climate change debate has been about the science. That has been convenient for the climate change deniers as a smaller and smaller number of dissenting scientists, many of them not even climate scientists. This strategy is right out of the Merchants of Doubt playbook. The deniers’ arguments were attractive to us too – we wanted them to be right, we wanted to continue with business as usual. Denial and despair are the twin impediments to taking responsibility to address this global challenge.

In Glasgow in November at COP26 we shall see whether or not the governments can agree on more that headlines and rhetoric. Effective action is required. It is required now at COP26. That’s right, the 26th meeting of the Conference of the Parties. The Kyoto Protocol was adopted at COP3 in 1997, nearly 24 years ago. The Kyoto Protocol accepted that developed countries are principally responsible for the current high levels of greenhouse gas emissions due to 150 years of industrial activity. Consequently, the protocol placed a heavier burden on developed nations than less-developed nations. The Paris Agreement followed in 2015 requests each country to outline and communicate their post-2020 climate actions, known as their NDCs (Nationally Determined Contributions.) Less than half the countries which signed up to the agreement have filed their NDC.

These graphs from the United States Environment Protection Agency show concentrations of carbon dioxide in the atmosphere from hundreds of thousands of years ago through 2019, measured in parts per million (ppm). The data come from a variety of historical ice core studies and recent air monitoring sites around the world. 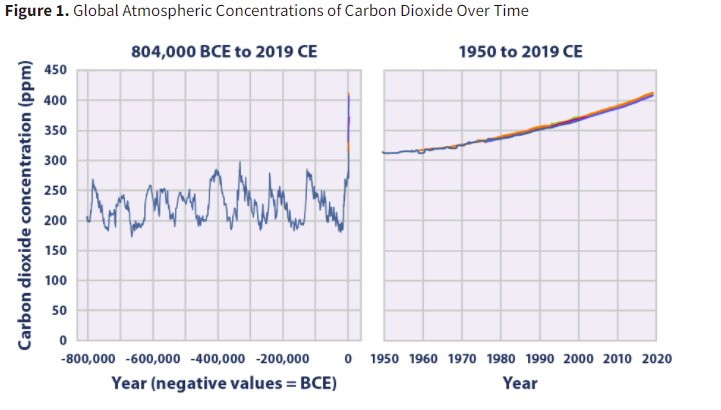 The evidence is clear. The level of CO2 in our atmosphere is unprecedented. The data shows a tiny reduction in 2008 due to the global crisis, but the concentration of greenhouse gases rises inexorably. We are not reducing emissions; we are not even denting the upward trend.

Obviously, we need to continue efforts to reduce emissions, and we need to treat this as an urgent priority. We are already experiencing heavier precipitation and flooding, drought, heatwaves and wildfires, sea-level rise and coastal erosion and increased frequency and intensity of cyclones & Hurricanes.  On current trends, by 2050 we shall have passed well beyond 1.5 and 2 degrees. More declarations of intent and long term targets don’t cut it.

Climate change will bring more extreme weather events, producing major changes to how travellers can take holidays. People will seek to holiday away from extreme heat, just as we do now. Reuters recently reported that: More than 60 million Americans across the Pacific Northwest and the U.S. Southeast were under a heat advisory on Friday, facing temperatures well into the 100s and near-record high temperatures in parts of Idaho and Washington.” Wildfires have forced the evacuation of tourists from coastal resorts in Turkey; floods affected several river basins across Northern and Central Europe, including Austria, Belgium, Croatia, Germany, Luxembourg, the Netherlands, Romania,  Switzerland and Italy,  have all damaged tourist areas and disaster tourists hampered rescue efforts.

Words, even fine words and big promises, no longer cut it; if they ever did. Actions matter; we need governments and businesses to take responsibility. Just as with the Global Responsible Tourism Awards, it is actions and impact that count.