I was privileged to spend last week in India, first in Kerala and then in Delhi, for the 4th India Responsible Tourism Awards – one of the family of awards now licenced by WTM London. While the adoption of Responsible Tourism principles and practices in India remains patchy, there are many individual businesses taking responsibility for making tourism better, from homestays and village potters, to the luxurious Shangri La-Eros hotel in Delhi with its dual water recycling system.

In the state of Kerala, government has adopted Responsible Tourism as its tourism policy with support from the Chief Minister and Minister of Tourism to the local village panchayats. Kerala is now the leading Responsible Tourism destination in the world. Kadakampally Surendran, Kerala’s Minister for Tourism, said recently “RT is indeed an achievement the government can be proud of. We have pledged our full support to the mission. RT has over 60,000 beneficiaries now. From just 198, there are currently 11,523 units under RT. These numbers are proof that RT is a successful model to follow…” There has been spectacular growth in Responsible Tourism in Kerala in the last twelve months and it is delivering.

Responsible Tourism began as a response to protests by local people and the local government panchayats about waste and the lack of community benefits. Many local people felt tourism was taking advantage of their villages. Following the 2nd International Conference on Responsible Tourism in Destinations, held in Kerala in 2008, the state experimented with Responsible Tourism initiative in four villages – it was most successful in Kumarakom where a census in 2015 found that  70% of households were involved in tourism and where less than 1% thought the impact of tourism was entirely bad. Kerala has successfully addressed the challenge of overtourism by managing waste better and enabling the local community to benefit by securing additional incomes and employment. Responsible Tourism is now being rolled out across the whole state. Responsible Tourism is receiving very favourable coverage in the Indian broadsheets, as seen this month in The Hindu. Kerala is now using tourism for local development, rather than allowing it to take advantage of the State. 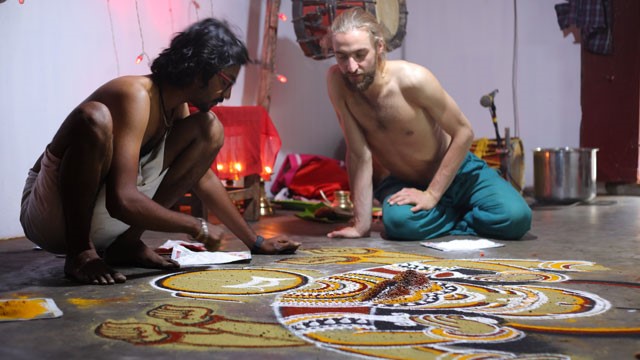 I was in Vaikom where a whole series of new experiences have been created, from pottery and handlooms to Kalamezhuthu (photo above). Kerala is dispersing tourism across the state, avoiding honeypots and ensuring that the benefits are widely spread in communities where tourism provides an additional and supplementary income for local households. The Village Life Experiences which have proliferated across Kerala have benefited from the growth in the experience economy, both domestic and international tourists increasingly seek out experiences which enable the guest to have a closer encounter with the hosts and to have a richer more fulfilling and memorable experience. Click here for a wealth of examples. The Secretary Tourism has announced that Kerala will also develop adventure tourism: “We plan aggressive marketing of adventure tourism (AT) in 2019, as part of our ‘experiential tourism package’. This will be in a largely rural settings, so that the local community too stands to benefit.” More inclusive kayaking will challenge the houseboats hired by the privileged.

In the India Responsible Tourism Awards, we ensure that applicants are judged on a par with those in the World and Africa Awards. We identify the best of those that apply in each category assessing them against global best practice in Responsible Tourism. There were over 250 applications in the five categories and there were many with a good chance of winning in the World Awards.  Himalayan Ecotourism was the overall winner. The judges recognised that the co-operative structure linked with a more internationally-oriented marketing and management company, which in turn guarantees profits for the staff, owned co-operatively, as a model for tourism development. This ensures local benefits and control, empowers local communities and provides a viable route to market as a model which could (and should) be replicated.

The judges recognised CGH Earth’s Spice Village as having made an Outstanding Contribution to the development and practice of Responsible Tourism and so the Judges’ Award went to them. “Early adopters of Responsible Tourism, they have created experiences that pay “homage to nature and engage closely with local people and their cultures.” They have proved that “less can be more and that true luxury is an experience rooted in simplicity and soul, transcending mere form and ostentation.”