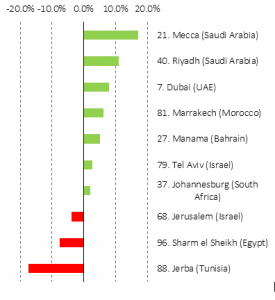 The new 100 cities ranking shows that:

§ Dubai is the top performer in the region, ranking 7th and seeing continued steady growth in 2015 with 8% increase in inbound arrivals. The city is benefitting from years of extensive investment in state-of-the-art and world-leading infrastructure, luxury shopping, hotels and entertainment.

§ The Middle East and Africa region has 12 cities in the Top 100, but the vast majority are located in the Middle East and North Africa. Johannesburg is the only city from the rest of the African continent which makes it into the ranking, ranking 37th and growing 2% in 2015.

§ Tunisia fell on hard times with multiple terrorist attacks, including the shooting on the beach of a resort in Sousse in June 2015. Jerba is the only Tunisian city in the Top 100 ranking, but all cities in the country registered double digit declines, with Sousse experiencing a decline of 61% compared to 2014.

§ Mecca in Saudi Arabia was the strongest performer in the region, as 2015 saw a strong growth in the number of religious tourists flocking to the city.