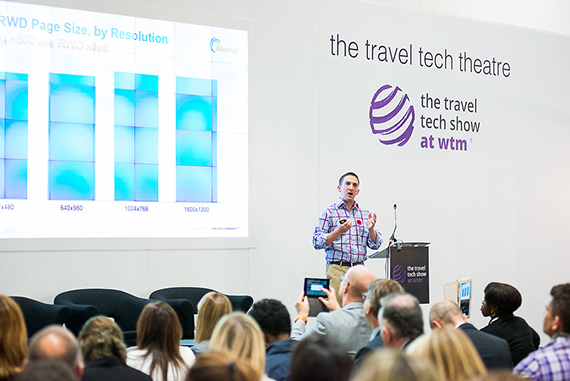 World Travel Market 2015, the leading global event for the travel industry, has announced e-commerce specialist Frosmo is to sponsor the Travel Tech Theatre, part of the Travel Tech Show at WTM 2015.

Frosmo, based in Finland, signed the sponsorship deal after a hugely successful exhibiting debut at WTM in 2014, which resulted in €1million-worth of business.

Tatiana Caciur, Marketing Manager at Frosmo, said: “Exhibiting at the Travel Tech Show at WTM 2014 was a really smart move for us and generated a great deal of interest. We’ve already closed several business deals and have others pending – including a six-figure deal with one of the world’s largest travel sites.

“We saw first-hand last year how important the event is for anyone involved in the sector and the buzz that the event creates. We were keen to sponsor the Travel Tech Theatre, which is at the heart of the Travel Tech Show at WTM.”

World Travel Market, Senior Director, Simon Press said: “The fact that Frosmo – a first-time exhibitor at WTM last year – has signed up to sponsor the Travel Tech Theatre is a fantastic endorsement for WTM as the must-attend event for companies who want to expand their reach in travel.

“Frosmo has ambitious plans within the global travel sector and this sponsorship deal will help the company build on last year’s success by providing high-visibility branding to get its message out to key partners.”

The Travel Tech Show at WTM offers travel and hospitality technology suppliers the perfect platform to promote their products and the Travel Tech Theatre is the setting for lively seminars and other events.

The theatre itself has seating for 120 delegates and each year the programme is completely full, with many of the seminars at standing room only. Last year it attracted 2,720 delegates – up 22% on 2013.

The theatre is also the venue for the WTM Travel Technology Networking Drinks Reception, sponsored by Illusions Online, which takes place at 5:30pm on the first day of WTM 2015, on November 2.
-ends-

About Frosmo
Frosmo offers e-travel companies growth management software. It allows them to bypass any limitations of their current CMS and/or platform. They can perform any kind of website development in the fastest way possible based on user preferences and behaviour. Speed becomes their competitive advantage as through these modifications e-travel companies can learn faster what works best for their customers, thus increasing the revenue and minimising web development costs. Clients include Finnair, Thomas Cook’s Swedish tour operator Ving, TUI’s Finnish tour operator Finnmatkat and Nordic Choice Hotels. At WTM 2015 Frosmo will be on stand TT455.