With less than one month to go until the ceremony for the 2019 African Responsible Tourism Awards (#ARTA19), the award has two exciting announcements. Wesgro – Cape Town and the Western Cape’s official tourism, trade and investment promotion agency – have for the fifth consecutive year signed on as the main sponsor of the awards. They will be joined on stage by RSG radio producer and presenter, Martelize Brink, who will MC the ceremony. 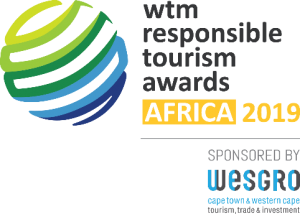 Wesgro’s CEO, Tim Harris, is particularly excited about the category for Best Cultural or Heritage Experience and said “Recently much hard work has gone into growing tourism that highlights aspects of the Western Cape’s culture and heritage. The province is adding layers to its already multi-dimensional tourism offering. We are keen to see what we can learn from the awards’ winners and provide exciting and responsible experiences to wider range of visitors.

For the past 10 years listeners to RSG have tuned in to Martelize’s lifestyle programme “Oggend on RSG” for a dose of her cheer and positivity. Martelize also produces documentaries for RSG focusing on a myriad of topics including global warming and the Khoi and San cultures.

Martelize is waging a war against comfort zones. She has kayaked to Robben Island and visited the forests of Rwanda to meet gorillas – all without the use of her legs. Martelize has been in a wheelchair for over 20 years due to an illness she experienced as a teen.  In this “discomfort” Martelize felt complete freedom and joy.  In 2012 she started the Pink Penguin project in support of charities that challenge her outside of her comfort zone.

This year the awards longlist includes 36 tourism organisations from eight countries. A large exhibition for the meetings industry, an operator specialising in Kilimanjaro treks and a museum focussing on gangsterism are among those longlisted. Judging, which happens at the end of the month, is sure to be tough. Who will make the finals?

Find out more about the African Responsible Tourism Awards and the longlisters here: https://bettertourismafrica.org/arta/african-responsible-tourism-awards/

The 2019 African Responsible Tourism Awards winners will be announced at a ceremony to be held on Wednesday, 10 April 2018 at the Cape Town International Convention Centre. The ceremony is part of the responsible tourism programme at WTM Africa, which takes place from 10 to 12 April 2019.