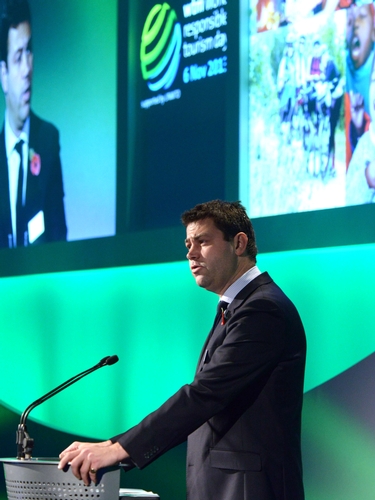 Regular host of World Responsible Tourism Day, BBC Hardtalk’s Stephen Sackur, will open the day by interviewing co-founder of Wilderness Safaris Colin Bell, and CEO of conservation charity Tusk, Charlie Mayhew. They will discuss how Africa, the tourism industry and the world at large respond to a crisis that has already this year seen more than 618 rhino killed in South Africa. The figure is more than were poached in the Kruger Park, the epicentre of the problem, during the whole of 2013.

Elephant and lion numbers are also being drastically reduced, to the point that the very viability of perhaps the three most iconic animals of safari’s Big Five – at the heart of Arica’s tourism draw – are at risk of extinction in the wild in many countries. The panel will discuss what can be done to change this, exploring approaches such as whether legalising the trade might work to suppress prices and demand, and Colin Bell’s current proposal that a 1% levy be charged on all tourism accommodation and related services in South Africa to support a ‘Natural Capital Fund’ directed at addressing the issue.

The opening debate is followed by the World Responsible Tourism Awards at WTM.

WTM put child protection on the agenda back in 2011 when we discussed the internal trafficking of orphans in Cambodia to populate orphanages. Every year we have sought to broaden the scope of the debate, covering issues ranging from child labour and the sexual exploitation of children to the safety of young people gap-yearing abroad and the issues of child abuse and neglect which arise in outbound families.

We have also addressed these issues at WTM Responsible Tourism panels now taking place at our regional events WTM Latin America and WTM Africa. This year the debate will look at the full range of issues relating to child protection and tourism and address the question: “This House believes that the tourism industry could do a good deal more to take responsibility for child protection and urges it to do so.”

World Travel Market, Senior Director, Simon Press said: “I am delighted to welcome both Colin Bell and Charlie Mayhew to WTM 2014. The issue of wildlife poaching is a critical one as a number of animals are at the risk of extinction. The tourism industry has a responsibility to protect animals as well as their natural habitat.”

The programme for WTM’s World Responsible Tourism Day is once again sponsored by BBC World News.

For the first time, this year WTM’s Responsible Tourism programme will run across all four days of WTM London (Monday 3 – Thursday 6 November).