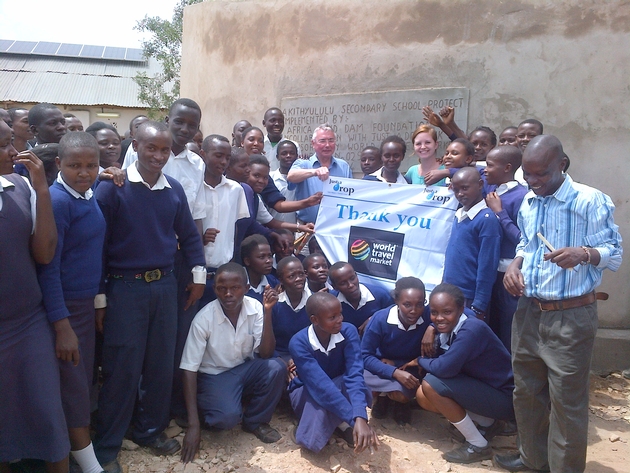 Having just returned from Kenya, it is hard to think from the photos that these happy children and their communities do not even have the simple amenity of water.

What hit home with me was the responsibility for these projects that ultimately laid with the schools and their communities, instead of the charity swooping in, doing the work, and leaving again. Mike Reynolds, Just a Drop’s Project Engineer for the trip, explained that he had passed many communities both in Kenya and across Sub-Saharan Africa where other facilities had been left in disrepair and were consequently no longer in use. The reason can often be attributed to the fact that many communities are not given ownership of the projects from the start – something Just a Drop believes is essential.

Just a Drop works closely with the communities; for example, at Kwa Mbotoe Primary School, there were groups of parents working on the rainwater harvesting tank in rotas, to ensure that they all have the knowledge – and with that the authority – to fix something if it goes wrong. This ensures maximum longevity for their projects and results in the need for less visits after the project is complete, as the communities manage it themselves. The materials for the tank that are available locally, such as rocks and sand, in addition to the labour, are also expected to be sourced by the community so that they are not simply “getting something for nothing”.

With a little over 300 pupils at Kwa Mbotoe Primary School, and approximately 150 at Kithyululu Secondary School, along with their teachers, it is not hard to see straight away the people that these projects will benefit. What’s more, at Kithyululu School, the plan is also to give access to this water to the local villagers – therefore the wider impact and benefits of these projects are not truly measurable.

Whilst there are many other things affecting their lives, such as HIV and Malaria, that cannot be solved with water, it was not hard to imagine the improved sanitation and therefore huge benefits to health for all of these children and their communities. I am hoping to go back in a couple of years, to truly see the difference these projects have made to their lives, once they are fully in place and functional. It has been a truly overwhelming experience, and really makes you realise how lucky we are at home.