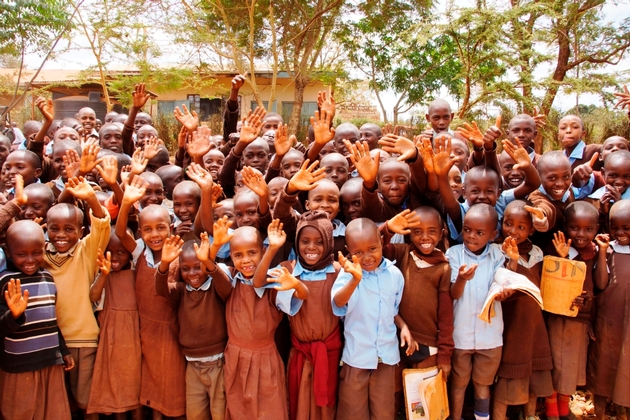 It was our first stop on the Just a Drop trip (23 – 26 January 2014), Kwa Mbotoe Primary School, Makueni County. This school is only 3km from the main road and a small community so it wasn’t as far as I thought away from civilisation. As soon as we went through the gates, hundreds of children aged between six and 13 came running over to give us a warm welcome.

They weren’t sure at first but were egging each other on to get a little nearer to us! Most of them carried on playing at the start while we were being introduced to the headmistress and deputy head before they were called in their classes and lined up very neatly! The headmistress was an amazing woman who has driven her school to be the third best in their county. She has managed to introduce some electricity and now this new rainwater harvesting system.

It is all well and good WTM donating the money for this to be installed but if it weren’t for Just a Drop and partner, the Africa Sand Dam Foundation (ASDF), and moreover, the parents then it wouldn’t have happened.  This is because both Just a Drop and ASDF have a policy to not just hand this opportunity on a plate to these schools but make them contribute so they can see the benefit of the up keep for years to come. In this case the parents took turns on a rota system to work along-side two skilled workers from ASDF in building the system and huge tank. They are also going to pay for the water treatment to make it drinkable.

I loved how inquisitive the children were; they had immediate smiles on their faces and all looked smart in their uniforms but each with a slightly different twist. They were intrigued with us the moment we stepped out of the car. They were well behaved….well most of the time!

There were a couple of cheeky girls around the age of six/seven that managed to evade being in the classes and when I looked back at my photos they managed to get in most of them! One of them had this cute woollen balaclava style headwear (it was colder weather for them, while we were boiling and had slapped on the sun cream!).  They just wanted to touch you, your skin, hair, jewellery and even my finger nails with nail polish on.

What struck me though is that they didn’t have a kitchen at the school so every child has to bring their own packed lunch and if the parents can’t afford it or it has been a particularly bad season then they just come to school without lunch and go hungry for the day. Some of them are orphans, some of them have AIDS; the teachers knew about some of the children but the ones that were orphaned, they had no way of knowing what their parents died of, so they didn’t know if they carried the disease or not.

They all want to learn; even at such a young age they know education is key. They were being taught life skills and then going back and teaching their mums/guardians about hygiene.

Older children were learning about countries of the world, their schools books were in English, maps of Africa on the wall, there was also a comprehensive school timetable (right).  Also the 11/12 year olds were taking exams which are the Kenyan Certificate of Primary School Education, this includes English, Swahili, Science, Maths and Social Studies. Parents pay around 100 shillings a month which equates to around £1 for the children to go to school.

At the lower part of the school I noticed there was a slight smell of elephant dung and realised this is where the latrines were. They took us to see them and they consisted of around 12 cubicles with a hole in the ground. They were built though with a design purpose: the doors faced a certain way to allow the wind to carry the smell away from the school! We had a long journey ahead of us so just before we left we gave the latrines a go. The deputy head kindly gave us some toilet roll, and actually there weren’t too bad! When I came out there wasn’t any water in the tippy tap so was just going to sanitise my hands once back in the car. A group of children were huddled waiting outside and we decided to ask if they wash their hands. We didn’t get an answer but one of the children offered his half a bottle of water he had left for the day to me, I couldn’t believe how generous he was being!

I did decline and sanitise my hands in the car! By the time you read this the water tank will be finished, they will have started to fill it and they will be able to get clean drinking water without walking miles! This will then lead to them building hand washing facilities.