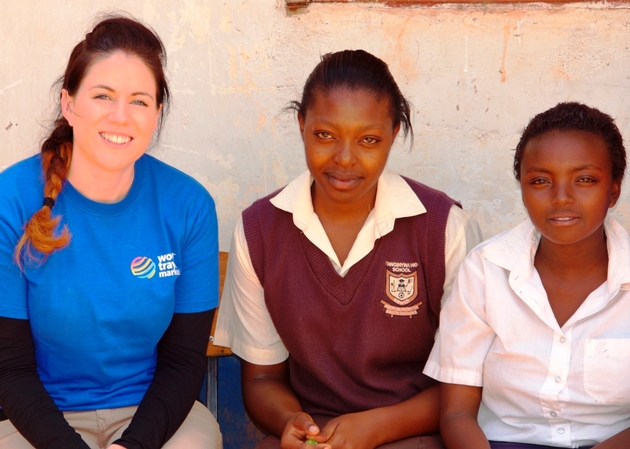 When the details about the planned trip to Kenya were released I was particularly moved when I heard about the situation that the teenage girls of the secondary school were in when it came to their health and hygiene and ultimately, their future prospects due to the lack of clean water available to them.

After being chosen to represent WTM on the trip, I was inspired to collect mini soaps for the girls from hotels that myself and the others in the operations department stayed in. Richmond Hill Hotel also kindly donated some.

Kithyululu Secondary School has roughly 150 pupils, 40 of whom are girls boarding at the school. The girls’ parents chose to send their daughters to a more remote school to prevent them from being badly influenced in the city – much like some families chose to do in the UK!

Upon our arrival at the school we were given a tour where we were shown the girls’ dormitory. What struck me first is that not all of the girls had mosquito nets covering their beds. When we asked why we were told because the families couldn’t afford them. The nets only cost £5 each and if I could have bought all the girls a net there and then I would have!

The girls now have a new washing area which will allow them to use the water from the rainwater harvesting system to wash themselves and their clothes. By being able to do this they will be able to tend to their hygiene and better their own health. This will be such a vast improvement to their lives that you can’t help but be very proud of WTM’s support in raising funds in order that Just a Drop can carry out this vital work.

The schools’ music group performed some songs and dancing for us which was brilliant to watch and I am still humming a song that they sang to us as it was so catchy, but overall it was the poem that was written for Just a Drop that touched me. Written by a girl called Veronica, it gave thanks for the new water system and hope that in the future that they would all have enough soap to enable them to clean themselves and their clothes. At this point I had to look over at the WTM team in thanks that we collected the soap!

After the singing and dancing we got the chance to talk with the students and it was great to hear about the football teams they liked and it was funny that they all wanted to touch our hair.  I took the opportunity to sit and chat with a group of girls aged 18 about what they enjoy at school and what they want to do when they finish.  Veronica was quick to say that she wanted to become a journalist so that she could write, travel and learn about the world.  It was interesting that she knew exactly what she wanted to life at such a young age.

Visiting the schools in Kenya has been a very insightful experience and as much as I was prepared to be upset by what we might see it was truly the opposite.  People were so happy to have the rainwater harvesting system as they know that their future about to change. They are not going to have to walk as far to collect water but also know that the water they now have access to is safer for them. The water system is something that they are going to have access to for the rest of their lives and for their generations to come.