Do you love adventure? Does African wildlife inspire and amaze you? Do you want your children’s children to be able to see wild elephants? Yes? You sound a lot like Holly Budge. Holly is the founder of How Many Elephants. The charity has a simple mission. Stop the poaching of African elephants. Simple, but critical. Because every day, 96 elephants are killed for their ivory. That’s 35,000+ of these magnificent, gentle, intelligent animals a year. That’s a decade to extinction.

The How Many Elephants exhibition will be showcased in the Responsible Tourism cafe at The World Travel Market in Excel on November 4 – 6th November as part of WTM London’s campaign. 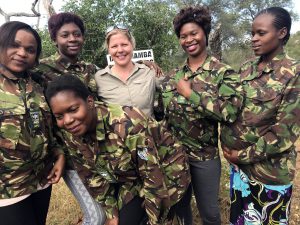 Budge’s hard-hitting How Many Elephants Exhibition uses design as a powerful communication tool to bridge the gap between scientific data and human connection, showcasing 35,000 elephant silhouettes to visually show the poaching data and the sheer scale of the crisis.

“Part of the originality of my exhibition is in my approach to avoid gruesome and shocking imagery to portray the facts. To actually see and connect with this data visually is very impactful” says Budge.

The thought of the African savannah devoid of elephants is heart-breaking enough but putting emotion aside, the impacts of losing these animals will be of extreme detriment to the environment and beyond; If the elephants go extinct, entire ecosystems could follow as they are a keystone species and important ecosystem engineers. 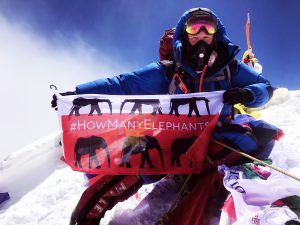 Budge uses her world record adventures, including being the first woman to skydive Everest and more recently, summit Everest, to speak about conservation issues and raise charitable funds. In September, Budge immersed herself on the frontline with the Akashinga, a fully armed, all female anti-poaching team who operate in the Zambezi Valley. Budge is no stranger to the front line having spent several weeks last year with the Black Mambas in South Africa who are armed only with pepper spray and hand cuffs. The two female teams are both making a tremendous impact “on the ground” in Africa.

To date, Budge has fundraised over £300K for various charities.

The recent CITES’ World Wildlife Conference in Geneva, Switzerland, have said “we [humans] depend on biodiversity. It is not just an environmental issue.” Education and awareness are the key to changing attitudes and behaviour towards ivory and try and bring a halt to this devastating trade.

Calling all conservationists, scientists, politicians, educators, storytellers, adventurers and change makers, who dare to say, “I can make a difference in the world”, it’s time to stand up for elephants, before it is too late. 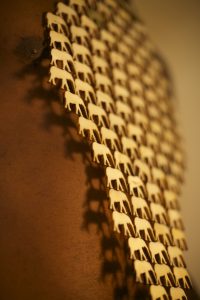 Holly Budge and How Many Elephants will be posting updates from WTM London on social media using the following hashtag #HowManyElephants. Make sure you follow them on Instagram and Facebook @howmanyelephants and twitter @howmanyellies

ABOUT HOW MANY ELEPHANTS:

How Many Elephants is a powerful design-led campaign, inspiring and educating a global audience about the devastating impacts of the African elephant ivory trade. Holly Budge founded How Many Elephants whilst studying for a masters in Sustainable Design in 2014. The How Many Elephants Campaign is highly impactful and will be showcased in China next year. Find out more on their website www.howmanyelephants.org