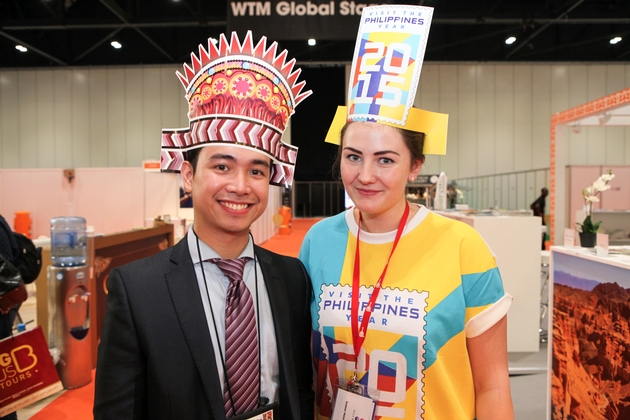 The Philippines Department of Tourism said its delegation at World Travel Market 2014 – the leading global event for the travel industry – was “by far the largest yet”, with two major business deals agreed and the announcements of events for “Visit the Philippines Year 2015”.

The Philippines signed two key deals at WTM 2014 – one with the GTI (Global Tourism Interface) Network and the other with leading youth tour specialist, STA Travel.

The GTI marketing initiative aims to boost numbers from the UK, France, Italy and Spain through the creation of a digital press office; social media campaigns; blogger press trips; and joint promotional activities with the travel trade.

And, thanks to the STA deal, a year-long campaign will target those aged 19 to 35 in Austria, Australia, France, Germany, Switzerland and the UK.

Objectives in the partnership agreement include an 80%-100% growth in youth travel to the Philippines, which would result in an additional 8,000 travellers over a 12-month period.

“WTM 2014 for the Philippines has been a bumper event,” he said. “It has, by far, been the largest yet on many fronts, including publicity, number of destinations represented and the size of the delegation.

“Most of our private sector partners, including tour operators, hotels and resorts, reported the inclusion of Philippines packages by new tour operators in the UK.

“The likes of Ethos Travel and Tropical Sky, to name a few, have said they will soon be featuring the country in their destination portfolio.”

A highlight for the tourism department was the international unveiling of events for “Visit the Philippines Year 2015”, which was promoted extensively at WTM.

The campaign aims to bring 10 million international visitors to the Philippines in 2016, up from about 4.7 million in 2013.

To gear up for the year of events, 155 Filipino delegation members were on the stand to spread the word, working with nine local government units, 35 private sector partners and other stand sharers such as Philippine Airlines (PAL), the nation’s flag-carrier.

The Philippines also took full advantage of the new WTM Festivals programme, which saw exhibitors hosting networking events and parties on their stands on day three of the event.

A 700-strong crowd were entertained by more than 50 performers who took part in the Philippines festival, including national dancers, beatboxers, hip-hop performers, West End stars and a percussion group.

World Travel Market, Senior Director, Simon Press said: “The numerous business deals agreed and signed at WTM by the Philippines and its stand sharers shows that WTM is the event where the global industry conducts its business. WTM 2014 is predicted to facilitate around £2.5 billion in global industry deals.

“It mirrors the wider success story from WTM 2014, which experienced an overall 4% increase in attendees, reaching almost 52,000 delegates, including a 7% increase in buyers from the WTM Buyers’ Club.”