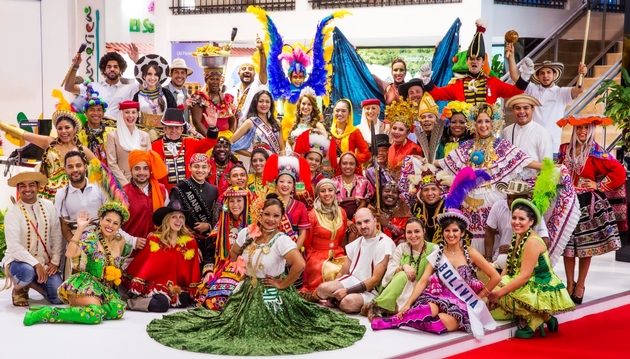 A timeline charting the rise and rise of WTM

World Travel Market, the leading global event for the travel industry, is this year celebrating its 35th event. Over the past three and a half decades WTM has established itself as the event where the industry conducts business its deals. WTM 2013 will lead to a massive £2.2 billion in travel deals.

Here we look back on the highlights and headlines of WTM since it first opened its doors way back in 1980.

1980 WTM’s launch event at Olympia was opened by the Duke of Kent and Miss World, Kimberly Santos of Guam. The event was attending by 350 exhibitors and 7,753 trade visitors.

1981 Princess Alexandra opened WTM to a near riot among Sun newspaper readers when a consumer promotion went wrong.

1982 WTM had already established itself as a fixture on the travel and tourism industry’s calendar with WTM 1982 attracting 50% more participants than the launch event.

1983 Paul Ryan Executive Director, Europe, Fairmont Hotels and Resorts was the first to construct a bi-level stand complete with a first floor. Up until 1983 WTM was made up entirely of shell schemes.

1984 WTM 1984 covered three Olympia Halls with each having its own entertainment stage. This increased size saw WTM 1984 attract 1,425 exhibitors and 28,922 trade visitors.

1985 The opening ceremony was standing-room only drawing its biggest crowd to date to watch Princess Diana opened the event. Princess Diana had just given birth to the youngest of her sons, Prince Harry.

1986 WTM’s Global Media Network is formed. WTM now has 50 official media partners all around the world.

1987 A ‘naked’ Lady Godiva riding a white horse on behalf of Coventry Tourism outside Earls Court caught the attention of delegates and passers by.

1988 Possibly inspired by Lady Godiva from the year before, the Indian Tourist Office hired an elephant from a local circus to parade up and down the WTM forecourt.

1989 Princess Anne helped WTM celebrate its 10th anniversary by opening the 1989 event. The Princess, alongside exhibitors and visitors, were shocked when anti-Apartheid protestors evaded security to drop leaflets on her head. The protestors also painted Olympia’s doors with red paint.

1990 WTM becomes so popular that a decision is made immediately after WTM 1990 to consider an alternative venue. The event moved to Earls Court two years later.

1991 As the Gulf War came to an end in February the effect it had on the travel industry was huge. The collapse of ILG and its UK-based subsidiaries, including Air Europe and Air Europe Express and the group’s two UK airline subsidiaries created a knock on effect with many jobs and businesses closing.

1993 Croatia exhibits at WTM for the first time as an independent country following the end of fighting in the Croatian War of Independence. Croatia is one of more than 5,000 exhibitors taking part at the second WTM held at Earl’s Court.

1995 Israeli Prime Minister Yitzhak Rabin was assassinated immediately prior to WTM. Security measures were stepped up at the exhibition.

1996 US exhibitors are the focus of attention as Bill Clinton is elected for a second term as president during World Travel Market. While the event’s key theme was the growing importance of technology with an Internet Café in the Central Feature Area

1997 Meridian Day – which gave buyers exclusive access to the first day of WTM – was extended to the Monday and Tuesday, placing an even greater emphasis on concluding business deals at the event.

The Egyptian Luxor massacre shocked the exhibition floor, as it took place during the event. More than 60 tourists were killed by an Islamic terrorist group. The massacre resulted in a major tightening of security measures for tourists in Egypt.

1999 Just a Drop helps the victims of a catastrophic earthquake in Turkey with clean water and water purification packs. The earthquake killed 845 people and injured nearly 5,000.

2001 WTM’s whole programme was completely rewritten following the events of 9/11. A two minute silence was held to mark the terrorist attacks and the programme explored the impact it would have on the travel and tourism industry.

2002 WTM moves from Earl’s Court to ExCeL London. Visitors were welcomed by the then Mayor of London, Ken Livingstone. The opening was performed by Her Majesty Queen Rania Al-Abdullah of Jordan. The world-famous Irish dance group Riverdance provided the entertainment, underlining ExCeL’s dockside location by the River Thames.

2003 Film superstar Michael Douglas caused a stir when he made an appearance at WTM representing Mallorca, where he and his wife Catherine Zeta Jones own a holiday home.

2007 WTM hosted the first UNWTO Ministers’ Summit on Tourism and Climate Change, a key part of an international programme to widen and deepen the debate on climate change when they agreed a declaration and presented to the UN’s Climate Summit in Bali a month later.

2010 WTM grew even bigger thanks to a 50% expansion of ExCeL. The World Travel Market Industry Report was launched, unveiling the latest statistics, opinion and opportunities from the WTM exhibition floor

2012 World Travel Market wins the Association of Event Organisers’ Award for Best Use of Social Media. The WTM Vision Conference Series become international with the first events in China and Russia.

2013 WTM recorded its record attendance smashing through the 50,000 barrier, with increases in all participant types including an 8% increase in buyers. The event will generate a massive £2.2 billion in business deals for exhibitors.