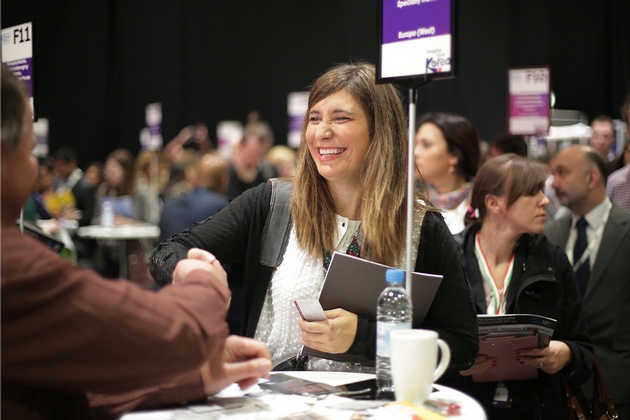 WTM Speed Networking sessions started the day, with the Thursday session proving as popular as the Monday meetings which started WTM 2014. Lamine Benghazi from Chinese tours and activities specialist haiwan.com said: “Even though we are quite specialised in the tours that we want for our Chinese outbound customers, I think 90% of the people I met were relevant and I’m sure we will be signing up new content as a result of these meetings.” The Photowalkers Co-owner Leanne Dryburgh said: “This is completely invigorating. We have a new concept in creative tourism and I have had the most amazing response. Our business is two years old and I have come here to WTM to help it expand.”

For the first time ever, WTM introduced a Bloggers Speed Networking session, which allowed destinations and bloggers to meet up was also a great success. Jasmine Rushton, Israel Government Tourist Office said: “I’ve met with some adventure, food, fashion and travel bloggers. What I enjoy at this event is that I meet people I have never heard of that have fantastic blogs.”

Craig Martin, Professional Travel Bloggers Association added: “We’ve met everyone from destination management companies to activity providers and some tech providers. Tech providers are just starting to work with bloggers as they see that we can add value for their clients.”

One of the many innovations at this year’s event was the Destination TV Showcase – TV producers met up with destinations and tourist boards in a speed networking format after a debate in which the benefits for a country to be featured in a TV show were highlighted.

Bloggers have been present across the entire event, and today was no exception. At the Travel Tech Show at WTM, TravelDudes founder Melvin Boecher and velvetescapes publisher Keith Jenkins shared the results of some blogging initiative run by destinations.

Tourism Australia ran a blog trip with Royal Brunei Airlines, designed to promote not only Melbourne road trips but also the airline’s new route from London to Melbourne, featuring a stopover in Brunei.

“The airline recently told me that Australia is now its number one destination from London, replacing Dubai, and that change has come about directly as a result of the coverage we generated for them via the bloggers on the trip,” said Boecher.

At the same event Kash Bhattacharya from budgettraveller.com said that the MustLoveFestivals campaign this summer was such a success that partner Expedia has committed to supporting a similar initiative next year, and that ten more destinations have asked to be involved, bringing to total to 19.

A comprehensive series of seminars looking into wellness tourism has been another new feature of this year’s WTM. Spafinder Wellness 365 Chief Brand Officer Mia Kyricos said: “We are seeing the convergence of data to quantify and legitimise our industry” with Lifehouse Hotel CEO Brian Hunter adding that UK and European governments should look at the reports in order to fully appreciate the importance of wellness tourism.

Immediately following the seminar, the inaugural Wellness Travel Awards by SpaFinder Wellness 365 at WTM were presented. The Crystal Awards, which honour the best Crystal Awards were given to the top wellness travel destinations on six continents.

Family Holiday Association programme manager John Kinnear said the new group would encourage networking and joint partnerships, allow members to share news and research and give them greater access to publicity opportunities. It would also enable members to create a coherent message.

“All £500m currently allocated [by central government] to breaks should be ring-fenced and not diverted by local government,” he said. “We can no longer afford to have 30% of families with dependent children excluded from the benefits a family day out can provide.

“Holidays help make stronger, healthier, happier families and contribute to a stronger, happier society that benefits everyone. A holiday is more than a political issue, it is a moral issue”.