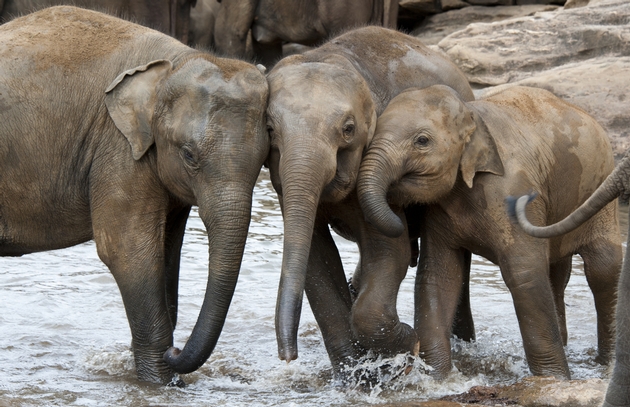 “Responsible tourism is the backbone of this industry. It helps us to give back to struggling communities and sustaining extraordinary biodiversity,” said WTM’s director Simon Press as he opened World Responsible Tourism Day. The urgency of the task of ensuring tourism’s responsibility was echoed by Taleb Rifai, Secretary-General of the World Tourism Organization, who told the audience that it was not enough just to be proud of tourism’s many positive impacts, and that “If we do not talk about the dark side of tourism, we will not be responsible.”

This dark side was laid bare over the next hour in a harrowing discussion over the crisis affecting much of Africa’s most iconic wildlife between BBC World’s Steven Sackur; the CEO of Tusk Trust Charlie Mayhew; and founder of Wilderness Safaris Colin Bell.

Colin Bell said that due to the escalating poaching crisis, the continent was losing 30,000 elephants a year to poachers, translating to 1 every 15 minutes. So bad has poaching become that it is now worth $18bn a year worldwide, with much of the money going to fund organised terrorism. The problem will continue to get worse, said Bell, if tourism industry doesn’t reform. “We are at tipping problem with tourism, but if it embraces its communities then tourism can be the sole provider of the solution,” he commented.

Both speakers agreed that there were examples of successes across the continent that showed the situation was not totally desperate, with Colin Bell citing Rwanda, Botswana and Namibia, and Charlie Mayhew explaining that as 70% of Kenya’s wildlife lives outside national parks, there is “a huge opportunity for communities to use tourism as tool for poverty alleviation.” However, he added, “if we lose security and tourism, all is lost”

Colin Bell proposed a 1% levy on tourism to Africa to be spent on conservation in the continent, and to focus the development of tourism not on mass tourism but on the controlled, low impact models adopted by the three countries above. “The days of expecting countries in Africa to be able to host people for very little money has to go,” said Bell.

The other great risk to Africa and its tourism industry right now – Ebola – was the focus of a press conference where government representatives from Ghana, Nigeria and Senegal urged people to understand that due to the efforts they have made, their countries are all Ebola free. Despite only three countries out of 50 in the continent being seriously affected, countries as far afield as Tanzania and South Africa have being negatively affected from huge numbers of tourists cancelling through fear of the disease. For the three countries worst affected, the situation is dire. “Ebola couldn’t have come at a worse time, as tourism was developing, with Bradt about to release guides to Guinea and Sierra Leone,” explained David Oades from Overlanding West Africa. “However there is no reason not to visit the other countries of West Africa.”

A group of responsible tour operators announced the #UNITE4WESTAFRICA campaign in response to the crisis. Launched by West Africa Discovery, Overlanding West Africa, Another World Adventures and Barefoot Liberia, the campaign calls on the tourism industry to continue to present positive stories from West Africa to counter the negative messages being presented as a result of Ebola. It will raise funds for Doctors Without Borders and a selection of other local NGOs doing most on the ground to help.

The day concluded with a debate on Child Protection and Tourism. Rather than being an issue focussed on sexual abuse, the panel made it clear that the issues were far broader. Bharti Patel CEO of Ecpat UK told of Vietnamese children are being smuggled into the UK to work on Cannabis farms.

Amongst all these negatives, the centrepiece of the day was once again the 11th annual World Responsible Tourism Awards, jointly won by two companies. Brazil’s Parque dos Sonhos is a remarkable inclusive resort in Brazil visited by able-bodied and disabled people alike, where all share in the activities, including canopy walks for the blind, ziplines for paraplegics, and white water rafting for quadriplegics. South Africa’s South African Animal Sanctuary Alliance has shown that it is possible to maintain sustainable wildlife sanctuaries of various species living in as close as possible habitat to their home range, without any of the petting and other animal touching experiences that is often being used as a front for canned lion hunting.